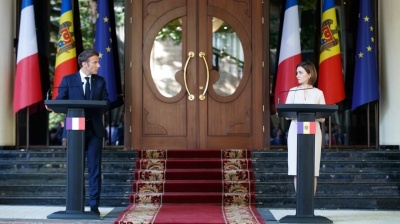 French President Emmanuel Macron said on June 15 that he wants to offer “guarantees of accelerated co-operation” to Moldova, which applied to join the EU earlier this year, and that France will help EU members to reach a consensus on whether to give candidate status to Moldova, Ukraine and Georgia.

Macron’s visit to Chisinau came on the same day as details emerged of the concept of a "European political community" broached by the French president recently, as a way of offering closer integration to European countries that are not members of the EU.

He said that as the current holder of the rotating EU Council presidency, France will help find a consensus among EU members on Moldova's application at the EU Council meeting on June 23-24.

“France will, on this occasion, fully play its role of presidency in order to build unity here too, to help reach a consensus which must recognise the extent of the efforts made, the legitimacy of the Moldovan people to join the European Union and send, in the times that you live and taking into account the context … a positive and clear message to the request that you have formulated,” said Macron, according to a statement from the French presidency.

“In addition, I wish to offer guarantees of accelerated co-operation to Moldova, which are in no way a substitute for the process of accession to the European Union and which aim to open concrete avenues of solidarity and co-operation as soon as possible. This is the meaning of the proposal that I made on 9 May last for a European political community,” he added.

The paper setting out the vision for a European political community was distributed to EU ambassadors on June 15.

Under the concept put forward by the French government, core EU states would enter into a political union with non-members, according to a report by RFE/RL, which has seen a copy of the paper.

The aim would be to strengthen the security, stability and prosperity of Europe. It would be open to European states "that share a common set of democratic values”. That could include not just aspiring members, but any European state "whether they wish to join [the EU], have left it, do not plan to join it, or are linked to it only by economic agreements”.

It seeks to address some of the concerns of EU candidates and would-be candidates by stressing that the community wouldn’t be a substitute for full membership in the EU.

“[F]or European states wishing to join the European Union, it would, on the contrary, allow for the strengthening of links with EU member states prior to accession, both politically and in terms of accompanying participation in certain EU policies, including, where appropriate, through gradual integration into the EU internal market,” says the paper, as quoted by RFE/RL.

Sources quoted by RFE/RL said that EU ambassadors from Austria, Belgium, Italy, Luxembourg and the Netherlands spoke favourably of the proposal.

Speaking at the press conference, Sandu stressed Moldova’s European values and the steps the government has been taking to fight corruption and reform the judiciary.

“We hope that our request [to join the EU] will be supported by the member states of the European Union at the Brussels summit on 23-24 June … In the difficult situation we are in, this important step will help us to continue the reforms initiated and the consolidation of our democracy,” Sandu said, according to a transcript published by the Moldovan presidency.

“We know that the European integration of the Republic of Moldova will be a long and complex process, which will require sustained efforts. I want to be clear: we are not looking for shortcuts in this process. We are ready to do our homework – and we want to be appreciated for the merit, for the result of our work.

“In this context, we welcome your initiative towards the European Political Community, which we support and of which we want to be a part. This is not an alternative to our European path, but a complementary initiative that will help us in the process of European integration,” Sandu said.

She added that Moldova wants to strengthen its political and security co-operation with Europe and to contribute to creating a “stronger, more integrated, more influential” Europe.

EU member states are due to make critical decisions at the June 23-24 EU Council meeting, not only for Moldova and the other Eastern Partnership states, but also for existing candidate states Albania and North Macedonia.

Both states have been waiting for years to start EU accession negotiations, but their process is blocked by the Bulgarian veto on talks wth North Macedonia. This also affects Albania, which is coupled with North Macedonia in the process.

The ruling Georgian Dream party has been criticised for eroding democracy since it took power in 2012. The European Parliament recently passed a resolution calling for sanctions on Bidzina Ivanishvili, Georgian Dream's founder and its former prime minister, for his alleged links with Russian President Vladimir Putin's regime. Ivanishvili made his fortune in Russia before Putin's rise to power. Georgia has refused to join sanctions on Russia.