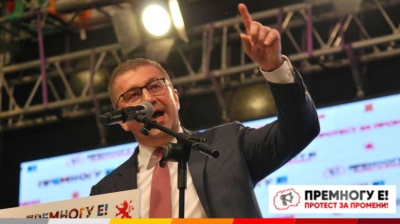 Tens of thousands people took to the streets in North Macedonia’s capital Skopje on July 2 to protest against the French proposal that would lift Bulgarian veto on the EU accession talks, claiming that it is harmful for the national interests.

The protest came after North Macedonia’s authorities said on July 1 that what they called a modified French proposal is acceptable as it protects the Macedonian language and keeps historical issues out of the EU negotiation framework. But the opposition accused the government of lying.

The protest was organised by the opposition VMRO-DPMNE and supported by the Left party under the motto "Ultimatum - No thanks".

People gathered in front of the government building to say ‘no’ to the so called French proposal, which the government said it was amended to take into account the country’s concerns. However, a according to the opposition and some experts it only means Bulgarisation of the nation in a long-term EU accession process, and denies the existence of Macedonian language.

“There is no date for the start of negotiations in that proposal, but there is a condition, for the launch of the negotiations to open the constitution and meet Sofia's demands,” VMRO-DPMNE leader Hristijan Mickoski said in the statement.

“As for Bulgaria, I want to make it clear that neither I nor VMRO-DPMNE will accept any humiliating agreement to the detriment of our national interests. If the government decides to proceed without a parliament or force it into the assembly, then the future VMRO-DPMNE government does not intend to respect and apply any point of this agreement,” Mickoski underlined.

“We don't need Europe if we are to assimilate [with Bulgaria]," the opposition leader added.

French President Emmanuel Macron said on June 30 — the final day of France’s EU Council presidency — that he is convinced that a compromise solution between Bulgaria and North Macedonia has been found. Bulgaria has been vetoing the start of EU accession talks with North Macedonia, an EU candidate for 17 years, since 2020, due to history, language, and cultural issues.

The Bulgarian parliament was unable to lift the veto before the EU summit held on June 23, but on June 24 the parliament approved the French proposal that would remove the veto with some conditions. One of them is for the Macedonian language not to be recognised as an official language in the EU.

“We have an opportunity for apparent progress in the European integration with a Macedonian language and identity recognized by the entire EU. We will get there without any conditions or concessions,” North Macedonia’s Justice Minister Bojan Maricic said.

According to him, progress after the EU screening process, which will start immediately after the approval of the proposal by North Macedonia’s side, will depend on the inclusion of ethnic Bulgarians in the constitution, which is one of the main conditions of the Bulgarian side.

Ethnic Croats and Montenegrins will also be included as constitutional nations, alongside Macedonians, Albanians and five other minorities.

North Macedonia's President Stevo Pendarovski said on July 3 that the French proposal is acceptable for him, but it will be "neither a triumph nor a debacle".