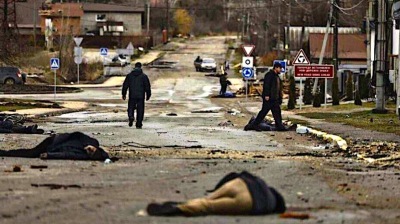 Meduza has obtained files containing high-quality videos depicting the southern districts of the city of Bucha, Kyiv region. The recording was made from a drone. According to the file metadata, these videos were filmed over several days, from March 23 to 30, 2022 (read more below). The recordings that we are publishing are another very important piece of evidence (along with satellite imagery in The New York Times ) which shows that people in Bucha were definitely killed even before the Russian troops retreated from the city.

What can be seen in the drone footage obtained by Meduza?

On these records, you can see the bodies of those killed lying on Yablonska Street, as well as on several neighbouring streets of Bucha. We geolocated the location of the bodies, and it completely coincided with the location of the bodies, which on April 1 and 2, 2022, after the retreat of the Russian troops from the city, the Ukrainian police and journalists filmed from the ground on video and photo. It is important to note that all the dead, filmed from the air, lie not only in the same places, but also in the same poses as on filming from the ground.

In several videos, next to the bodies (at a distance of several tens to several hundred metres), you can see military equipment similar to the equipment used by Russian airborne units (probably BMD and BTR-D). On one of the recordings, people can be distinguished next to one of these combat vehicles. At this time, the bodies of the dead continue to lie a few tens of metres from the location of the military.

On the shooting of March 29 and 30, Russian military equipment was not in the same place. It is March 30 that the Russian Ministry of Defence calls the day of the withdrawal of troops from Bucha.

Why is it important?

So far, the main objective documentary evidence that those killed in Bucha died during the presence of Russian troops has been satellite to prove that the Maxar filming took place on April 1, when Ukrainian troops entered Bucha.

We have not only obtained alternative documentary evidence of the presence of Russian troops in Bucha at the time when civilians were killed there, but also independently dated the resulting imagery using astronomical measurements.

Where did Meduza get these videos from?

The video was given to Meduza by Russian nationalist Sergei “Botsman” Korotkikh, whose group is fighting on the side of Ukraine. He claims that his fighters were regularly filming Russian positions in the southern regions of Bucha from their own drone.

Korotkikh is a stakeholder in this story, as pro-government Russian journalists accuse Botsman and his group of being the ones who killed the residents of Bucha on March 31 or April 1, when Russian troops had already left the city. So we carefully analysed the videos handed over to us – and made sure that forgery is extremely unlikely.

Why are we sure that the video was made before the arrival of Ukrainian troops?

Three main arguments allow us to confidently assert that the video that we are publishing was filmed before the Russian troops retreated from Bucha:

First of all, Russian military equipment is clearly visible on Yablonskaya Street, and on several shootings and on different days. Several armoured vehicles are there on the 23 and up to the 28 March. In the video, dated 29 March, Russian equipment is no longer on the street. Such equipment is not in service with the Ukrainian army.

Secondly, the source provided us with raw, original drone video files. These files contain detailed metadata, including data on the time of shooting.

Third, since metadata can be faked if desired, we engaged two independent experts who checked the shooting time using astronomical shadow analysis on the image. Their results confirmed that the time in the metadata matches the actual time of filming, and the first video of the dead could not be filmed after March 26, 2022.

The Russian Defence Ministry did not respond to Meduza's request for comment at the time of this publication.

This article first appeared in Meduza here, who have released it under a Creative Commons licence.