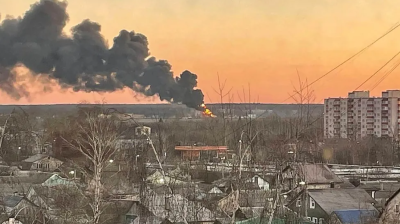 A missile struck an airfield in the Russian city of Kursk. Ukraine has adapted Soviet-era drones to strike targets deep in Russian territory that may mark a new stage in the war. /TASS / bne IntelliNews
By Meduza in Riga December 8, 2022

Two days in a row this week, the Ukrainian Armed Forces used drones to strike targets deep within Russia. Satellite images from December 5 show that Ukraine hit the Engels air base near Saratov and the Dyagilevo air base near Ryazan. Within a few hours, the Russian Aerospace Forces used aircraft and cruise missiles from those same airfields to launch strikes in Ukraine. Then, on December 6, a Ukrainian drone hit another target at a Russian air base: an oil storage tank in Kursk. That same day, a drone targeting Crimea's Belbek air base was reportedly shot down by Russian air defences.

This new wave of Ukrainian strikes on Russian territory could prove to be a turning point in the war; Kyiv has now shown that it, too, is capable of striking infrastructure targets on enemy territory. Meduza lays out what we know about Ukraine's drone capabilities and what that portends for the coming months.

What drones did Ukraine use?

A source from Ukraine’s military leadership told The New York Times that the drones that struck Russia's airbases this week were launched from Ukrainian territory. The distance from Kyiv-controlled land to the furthest target that was struck – the Engels air base – is about 630 km (390 miles).

The Russian Defence Ministry reported that “Soviet-made jet-powered drones” were used to carry out the strikes. This is consistent with security camera footage of the strike at the Engels base: in the clip, the sound of a jet engine can be heard right before the explosion.

The only “Soviet-made jet-powered drone” that can travel more than 600 km is the Tu-141 Strizh. This old-school unmanned aerial vehicle:

Theoretically, these kinds of jet-powered kamikaze drones are analogous to cruise missiles (in fact, that’s essentially what a Strizh with a warhead attached is).

However, it’s unclear exactly how the Ukrainian Armed Forces have modernised the Strizh drones in recent months (and whether the new drones are Strizh Tu-141s at all). If Strizh Tu-141s are indeed the basis of the new weapons, it’s important to note that in the 1980s, the Kharkiv Aviation Factory only produced about 150 drones. As a result, Ukraine could have problems with large-scale production of the weapon (especially in wartime conditions). At the same time, the most effective tactic for using the drones would likely be to launch dozens of simultaneous strikes (in order to “overload” Russia’s air defence systems, which can only deal with a limited number of targets at once). That’s what the Russian military does when it launches large-scale attacks on Ukrainian infrastructure.

In addition, not all components of the Strizh drones were manufactured in Ukraine, though the most important ones (such as the Kharkiv-built motor) are certainly accessible. Everything else can be bought: Ukraine’s defence sector, unlike Russia’s, isn’t under sanctions.

But the first use of Ukraine’s new models leaves some questions. It’s currently unclear whether the drones are precise enough to compensate for their relatively light warheads. On December 5, for example, Ukrainian drones failed to fully destroy even a single bomber – leaving Russia capable of using the very bombers that were targeted to launch strikes on Ukraine (the Russian Defence Ministry has claimed that the drones were shot down by the air bases’ air defence systems and that only their remains landed on the bombers, but this has not been confirmed).

In any case, Ukraine’s drones are not powerful enough to replace the ATACMS long-range missiles that Ukraine has long sought from the West to use with its HIMARS multiple rocket launchers. Washington, by its own admission, is concerned about the risk of uncontrolled escalation should Ukraine launch a strike deep within Russia, and thus has not supplied the ATACMS missiles, which are extremely precise and are equipped with 560-kilogram (1,234-pound) warheads.

Nonetheless, there’s little doubt that Kyiv will do everything possible to acquire more weapons capable of striking targets behind Russian lines. The Ukrainian army will likely soon develop drones analogous to the Iranian Shahed-136 ones used by Russia; they have all of the necessary technical capabilities. These drones would be significantly cheaper than jet-powered ones and would complement them well during large-scale attacks.

And even if Ukraine’s strikes don’t do significant damage to Russian equipment, they still force the Russian Armed Forces to spend resources guarding against them: Moscow will now have to ensure that territory far beyond the front line is covered by its air defence systems. Russia’s military command is trying to achieve a similar goal with its strategic strikes in Ukraine. The Ukrainian Armed Forces have now demonstrated their ability to respond symmetrically (albeit on a smaller scale).

ING: Hungarian retail sales suffer from record inflation
21 hours ago
ING: Romanian consumers shrug off pessimism into year-end
1 day ago
CENUSA: Bringing Ukraine, Moldova and Georgia closer to the EU: a multi-speed progress.
1 day ago
NEMETHY: How the Battle for Ukraine may change Europe
1 day ago
COMMENT: The new Cold War will be different, and not only because of China
2 days ago