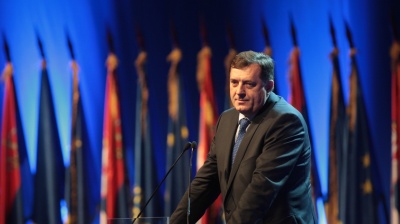 Dodik sought to reassure MEPs that he does not aim to break up Bosnia, but this comes in contrast to his secessionist rhetoric of recent years.

MEP Michael Gahler asked Dodik what he had discussed with Russian Foreign Minister Sergei Lavrov in Antalya, and if Banja Luka, the administrative centre of Bosnia's Serb-majority region Republika Srpska, would be recognised as the “Banja Luka republic just like Donetsk and Lugansk were” — referring to the two Russia-backed separatist republics within eastern Ukraine.

MEP Tineke Strik asked Dodik to break the ties with Kremlin and end “destructive rhetoric”, reported TV N1. In addition to that, she asked Dragan Covic, the speaker of Bosnia's House of Peoples and the leader of the strongest Croat party in Bosnia, HDZ BIH, to distance himself from Dodik until he condemns the aggression against Ukraine.

“I think we must be completely clear with Mr Dodik, that such actions are unacceptable because they directly threaten the integrity of Bosnia & Herzegovina,” she said. “If those decisions are not withdrawn we cannot accept that Dodik will remain serving his post.”

She welcomed EUFOR’s deployment of additional troops to the country, adding, “our priority is the security of the citizens of Bosnia & Herzegovina against any threat, whether from outside or from the leaders of Republika Srpska.”

Dodik told the committee that the Serb-majority region, Republika Srpska, has no plan to secede and that it wants a “constitutional Bosnia & Herzegovina”.

MPs in Republika Srpska voted last year to withdraw from Bosnian state institutions including the Bosnian army, raising fears this could be a step towards the breakup of the country.

Dodik also denied being under the influence of Russia, adding that there was nothing secret about his recent talks with Lavrov.

The other two members of Bosnia's joint presidency as well as the speaker of the House of Peoples also addressed AFET members to discuss the situation in Bosnia.

“Bosnia and Herzegovina is at a political crossroads, and while the best path for the country is to implement reforms that would bring it closer to EU and Nato membership, neighbouring Serbia and Croatia are trying to impose options that could lead to conflict,” said Zeljko Komsic, the current Bosnian Presidency Chairman.

“The Dayton Peace Agreement was not designed as a static framework that would keep Bosnia & Herzegovina the same as it was in 1995 forever and all the reforms that have been implemented since it was signed were part of the country’s path towards EU membership,” added Sefik Dzaferovic, the Bosniak member of the presidency.

“BiH has condemned Russia's aggression against Ukraine and we are aware of Russia's influence in BiH and the Western Balkans,” Dzaferovic said, TV N1 reported.