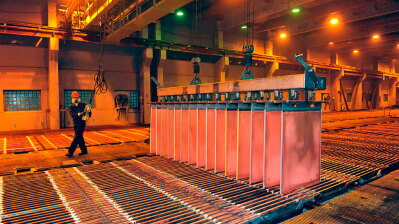 Many of Russia's precious metals industries have not yet been sanctioned. / Image: bne IntelliNews.
By bne IntellIiNews March 15, 2022

The UK and EU both announced a new round of sanctions on Tuesday, March 15 in response to Russia’s invasion of Ukraine. Between them, the UK, US and EU have sanctioned Russia’s financial institutions, its political elite, oligarchs, trade, air travel and major companies. But one specific industry has remained largely unscathed: metals.

Russian metals are notoriously difficult to sanction, because they are used in everything from smartphones to aeroplanes. Russia provides a tenth of the world’s copper and aluminium, a fifth of battery-grade nickel, and over 40% of the world’s palladium. As such, Russian metals are deeply embedded in global markets, as reported by bne IntelliNews.

Not all metals have escaped the latest round of sanctions. The EU and US have co-ordinated on a ban of finished steel imports from Russia.

"This will hit a central sector of Russia's system, deprive it of billions in export revenues and ensure that our citizens are not subsidising Putin's war," said European Commission President Ursula von der Leyen.

Yet metals tycoon Vladimir Potanin and his company Nornickel have thus far evaded sanctions. That may partly be down to a calculation that they aren’t in a position to exert influence over Vladimir Putin. But it is certainly also a consequence of Nornickel’s critical position in global supply chains.

Nornickel is the world’s largest producer of palladium and high-grade nickel. The latter is particularly important – an essential component in the production of EV batteries. The International Energy Agency (IEA) forecast earlier this year that nickel demand in electric vehicles (EVs) will grow by a factor of eight from 2020 to 2030, with a central role in the green transition. Biden has called for electric vehicles to make up 50% of vehicles sold in the US in 2030.

Palladium, meanwhile, is used in catalytic converters – a part used in conventional combustion engines. The US imports 35% of its palladium from Russia, more than any other country.

On March 7, the threat to Russian nickel exports caused the biggest crisis on the London Metals Exchange (LME) in decades, when the world’s biggest metal exchange was forced to halt trading after nickel prices topped $100,000 per tonne.

"The current events are unprecedented," the LME said in a notice to members. "The suspension of the nickel market has created a number of issues for market participants which need to be addressed."

In an interview with Bloomberg, Vladimir Potanin said: "we produce many products which are really needed by companies all over the world. Palladium, nickel, et cetera. If there is any kind of war, any kind of sanctions, it will not benefit anyone in the world," he added, alluding to the damage it would do to the global economy as well as to Russia’s.

Russian copper has also largely avoided sanctions. Russia’s vast new Udokan copper mine has not faced sanctions, and nor does it look likely to do so in the near future. Copper is an essential component in electrical wiring, and plays an important role in a lot of the world’s technology. Copper prices, which surpassed $10,000 per tonne last year, are currently near record highs. Russia is not one of the world’s largest copper suppliers, but it is doubtful that the West would want to risk upending markets by taking out a significant producer of one of the most in-demand metals.

That is not to say that these industries are being overlooked. Just as the US and UK have promised to phase out Russian energy imports over time, they are also hoping to find alternatives to Russian metals. KoBold Metals, a Silicon Valley startup, is collaborating with mining giant BHP to find more nickel and cobalt deposits in Western Australia using artificial intelligence. Meanwhile, western governments are likely to turn to other metal-extracting nations to ask them to increase their output, much as UK Prime Minister Boris Johnson is doing in Saudi Arabia for oil. As with all critical industries, metal company executives will be hoping that Russia reconsiders its invasion of Ukraine soon, before the world economy is dealt another massive blow.