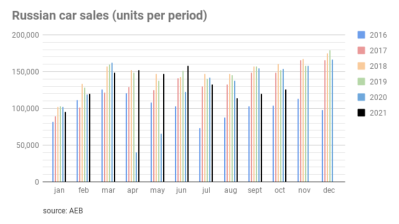 Russia’s new car and LCV (light commercial vehicle) market saw the fourth consecutive month of year-on-year decline in October, as the sales took another cut of 18% y/y to 0.126mn, according to the latest data published by the Association of European Businesses (AEB).

The strong beginning of the year maintained the sales in 10M21 overall in positive territory, with 10.5% y/y growth to 1.3mn units.

As reported by bne IntelliNews, Russia's car sales jumped 37% in 1H21, with the forecasts for full-year sales upgraded higher. But the closely watched global shortage of microchips has destabilised the Russian car market as well, with shortages of supply in new cars and a rise in prices.

Another month of sales decline was again mostly due to the microchip shortage continuing to weigh on supply, along with some base effect of October 2020, VTB Capital (VTBC) commented on November 9.

Nevertheless, VTBC also noted that the rate of y/y decline moderated somewhat in October vs. September, when car and LCV sales slid by 23% y/y. The analysts expect 2021 sales to increase around 5% y/y to some 1.7mn vehicles, assuming that the rate of the y/y decline will remain broadly unchanged in November and December.

UAZ brand of car assembler Sollers outperformed the market in October, with its sales increasing 2% y/y to 3,728 units. However, its 10M1 sales were still below the overall market trend, up just 2% y/y to 25,875 vehicles. In October, Ford Transit (produced by the joint venture with Ford, is consolidated by Sollers) sales declined for the first time in 2021, by 3% y/y to 1,605 units, although its 10M21 sales growth still outperformed the market – up 49% y/y to 15,616 units.

VTBC believes that the October decline in Sollers' sales reflects the supply constraints, as the demand for the model remains strong. The analysts remain neutral on Sollers shares (Hold call, 12-month target price of RUB250, estimated total return of 11%) due to the uncertainty over the prospects for its UAZ brand as well as the company's strategy toward minority shareholders.

In the meantime, the battery electric vehicle (BEV) segment continued to grow, although remained tiny in absolute terms. In particular, 10M21 BEV sales amounted to 845 vehicles, a 118% y/y increase.