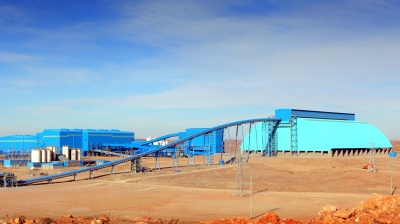 A copper concentrator at the Oyu Tolgoi mine.
By Anand Tumurtogoo in Ulaanbaatar August 10, 2021

Mismanagement, rather than poor subsurface geological conditions, was to blame for a $1.4bn budget overshoot in the underground expansion project at Rio Tinto's Oyu Tolgoi copper mine in Mongolia, an independent consulting group that investigated the cost overrun has concluded according to Turquoise Hill Resources, a unit 51%-owned by Rio.

Turquoise Hill and Mongolian state company Erdenes Oyu Tolgoi commissioned what turned out to be a 157-page report. It has primarily attributed project delays to key "enabling" infrastructure, including two one-kilometre deep shafts, which limited the number of underground crews that could be deployed to complete excavation work, the Financial Times reported.

The Wall Street Journal reported that the report spoke of an unhealthy culture across the site of the underground mine, which it attributed to a lack of coordination between teams. “People were working in silos with one group blaming the other for any failings,” it said.

Costs to expand the Oyu Tolgoi mine, Rio Tinto's biggest copper growth project, have ballooned up to $6.75bn from the original $5.3bn budget set in 2016, causing tensions over funding with Turquoise Hill.

Rio Tinto has previously blamed the mine's troubles on ground and geotechnical conditions that proved to be more difficult than anticipated; however, the report largely rejected this argument. Its authors, the Independent Consulting Group, said they found no evidence to suggest that the quality of the rock and general ground conditions were significantly different to that forecast by the miner’s owners in 2016. In some cases, the report said, the rock quality was better.

"Rio Tinto will engage with the OT [Oyu Tolgoi] Board as soon as we have had the opportunity to review the report in detail," Australia-based Rio Tinto said in a statement emailed to Reuters.

In mid-2019, Rio Tinto warned that the mine, originally seen as producing its first copper in 2020, would take far longer and cost significantly more to develop. It hiked the development expenses to $6.75bn in December 2020 and said that production would not begin until October 2022.

Following pressure from investors in Turquoise Hill, which owns 66% of the mine, and the Mongolian government, which owns the rest, regarding the delays, Oyu Tolgoi established a special committee comprised of members of the state-run company that controls the government's investment and Turquoise Hill. It was tasked with looking into the cost blowout.

The WSJ noted the report by the Independent Consulting Group said teams working on the underground mine didn’t have the requisite experience to handle the difficult ground and geotechnical and weather conditions at the site. In addition, the report said it does “not believe the necessary skills and collaboration was achieved within the assembled project team to manage the challenges of this complex project.”

“We are proud of the work done to date in building one of the world’s largest pieces of modern mining infrastructure in the Gobi Desert, and we welcome the opportunity to continue to engage with our project partners, as we all aim at moving forward and completing the underground,” a Rio Tinto spokesman told the WSJ.

Since the report was released, the Mongolian government has taken a hard stance with Rio, saying it will not come to the negotiating table unless the mine starts its underground production by September. Mongolia’s Justice and Internal Affairs Minister Nyambaatar Khishgee held a press conference on the report on August 9. He demanded Rio Tinto start the copper production according to the 2016 plans, saying that if it did not the government would not enter into any further discussions with Rio. “The Government of Mongolia cannot approve the feasibility study for the underground mine," Nyambaatar said.

He added: “And while production is under way, we can continue our conversations; nevertheless, waiting will be detrimental to investors and shareholders, including the Mongolian government. And there's a good chance we'll face more losses if they don't start the mining of copper. The Mongolian government will not approve Rio's feasibility study with a cost overrun until that time.”

CENTRAL ASIA BLOG: Mongolians tentatively hope the worst of COVID-19 is behind them