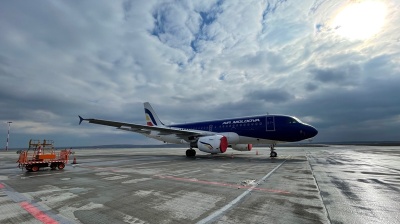 Air Moldova wants to resume flights from Chisinau airport to Moscow in response to demand from Moldovans in Russia who want to return home. / Air Moldova
By Iulian Ernst in Bucharest September 12, 2022

The Civil Aviation Authority (CAA) of Moldova issued a directive on September 10 banning all local airlines from operating within Russian airspace “for safety and security reasons”.

The decision came after Air Moldova — controlled by Russian owners — announced the launch of regular flights to Moscow starting October 1.

Air Moldova reacted by saying that it is considering challenging the CAA’s directive in court if it is unable to settle the dispute amicably.

According to the airline, its decision was a result of countless requests from citizens of Moldova, who are in Russia and want to return home.

Moldova closed its airspace on February 24 after Russia attacked Ukraine but later allowed flights toward Romania starting March 21, keeping the border with Ukraine closed. No supplementary restriction as regards the destination of the flights from Moldova was ever imposed until September 10.

In July, the CAA explained that local companies are not forbidden to operate flights to Russia, according to Noi.md. Indeed, Russian aircraft cannot reach Moldova since they are banned access to the European Union and Ukraine, but Moldovan companies are free to fly towards Russia, the CAA reportedly explained.

"Moldova has not imposed restrictions on Russian companies, but in fact, Russian aircraft cannot land in our country, because Ukrainian and EU airspace is closed for them. In return, our airlines can operate flights [to Russia] — but [the absence of such flights] is probably due to the higher expenses considering that they would have to cross a large territory," stated the CAA at that time.

Air Moldova’s decision to resume flights to Russia prompted firm reactions from the pro-EU authorities in Chisinau, who condemned the gesture as “a provocation”.

“It is a lie, like many others, aimed to create tensions. It was, again, an instrument of manipulation and misinformation used by this company, which is a company of some criminals. It is a deliberate ungrounded piece of news, which was circulated in order to create problems by those who want to destabilise the Republic of Moldova," said parliament speaker Igor Grosu quoted by Deschide.md.