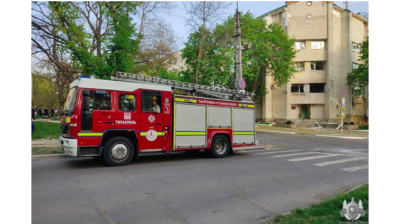 A fire engine outside an empty government office in Tiraspol targeted in one of the attacks earlier this week. / mvdpmr.org
By Iulian Ernst in Bucharest April 28, 2022

The Moldovan authorities have rejected an offer from Ukraine to seize the Russia-backed breakaway region of Transnistria.

There has been a series of unexplained attacks this week in Transnistria, a territory in the eastern part of Moldova bordering Ukraine, that hosts a Russian ‘peacekeeping’ force. This raised fears of an attempt to drag Transnistria — and thus Moldova — into the war in neighbouring Ukraine.

Ukraine is able to solve the Transnistrian problem "in the blink of an eye", but first, the Moldovan authorities must ask for help, Aleksei Arestovich, an adviser to Ukrainian President Volodymyr Zelenskiy, said on the evening of April 26.

In response, the Moldovan authorities firmly rejected any development other than peaceful. The law on the special status of Transnistria clearly states that the conflict can be settled by political means and only through peaceful solutions that exclude military and other forceful actions, Moldova’s Bureau of Reintegration said in a statement.

In order to feel safe, Moldova — even if it is a neutral country — needs to invest more in its armed forces, Sandu said on April 27, stressing that her country needs a functioning and modern army capable of responding to the challenges of the time.

"A strong and well-equipped army gives the country freedom of action, self-confidence and strategic choices. Therefore, we must make serious financial and logistical efforts to build a professional, modern and equipped army," said Sandu. on the occasion of the 30th anniversary of the founding of the General Staff of the National Army.

"We can intervene only after an official request because Transnistria is still an official territory belonging to Moldova. If necessary, we can solve the Transnistrian problem with the snap of our fingers," said Arestovici on April 26.

The Ukrainian official also stated that, in addition to Ukraine, another country that can help Moldova in the event of possible military aggression by pro-Russian separatists is Nato member Romania, Moldova’s western neighbour.

"There are about 1,600 Russian soldiers in Transnistria, plus the so-called army of the region, another 5,000-7,000, so to speak. Moldova could have big problems if they attacked. And the best thing Moldova can do in this case would be to seek help in Ukraine and Romania. Yes, Romania, because they are actually the same people. There are many Moldovans who would not agree with me, they have the position that they are a separate people, but the language is certainly the same. It is certain that they are close to the Romanians,” said Arestovici.

He also commented on Moscow's threats against Moldova. According to him, high-ranking Russian officials have already shown that their goal is to occupy the Republic of Moldova.

Ukraine has been clear that it needs more weapons from the West. So, what’s the holdup?
White House doubles number of long-range rocket launchers sent to Ukraine in fresh aid package
bneGREEN: Reducing investment in fossil fuels can fund Europe’s energy transition