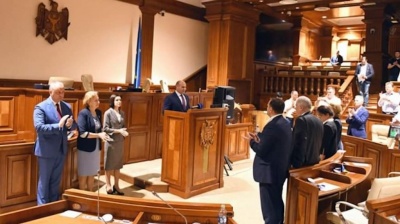 President Dodon congratulates the new government as it’s appointed by the parliament — but the outgoing government is still installed in the government buildings and is refusing to leave.
By Iulian Ernst in Bucharest June 11, 2019

The government of Pavel Filip remains in office in Moldova and has refused to hand over power, despite the new parliamentary majority appointing a government that has already held several meetings.

The situation remains largely calm, with the two sides consolidating their positions ahead of a possible confrontation.

The new government was formed by the pro-Russian Socialists and pro-EU ACUM alliance on June 8 but the following day the Constitutional Court suspended Dodon, the Socialists’ de facto leader and appointed Filip as interim president. Filip dissolved the parliament and called snap elections for September.

The new government headed by Prime Minister Maia Sandu of ACUM held its second meeting in the parliament’s premises on June 10, when it issued decrees to dismiss several state officials including the chief of police Alexandru Pânzari.

The ability to direct the police could be critical if the situation escalates, but they remain under the control of the outgoing minister Alexandru Jizdan.

Indeed, Sandu’s government appointed on June 8 lacks any control over public institutions and the legitimacy of its decrees is uncertain since they are not published in the Official Journal. Meanwhile, the outgoing government controlled by Plahotniuc has published the decree issued by Filip on dissolving the parliament in the journal.

In his turn, Dodon summoned the Security Council for June 11. The body includes the ministers of interior and defence, and provides the presidency with certain power over the two crucial ministries, irrespective of their political orientation.

Jizdan stated that the police will focus on securing public order. The ministry of defence issued a similar statement, saying it does not aim to take sides.

However, as the standoff continues, the Democratic Party led by oligarch Vlad Plahotnuic which led the outgoing government and is still in control of the state’s executive branch, has asked for help in defending public premises and tents have been installed in front of the key public institutions.

At the same time, the Democrats have invited the Socialists and ACUM to negotiations while not acknowledging their new government.

In a joint statement, France, Germany, Poland, Sweden and the the UK, recommended Moldova to settle the constitutional crisis in parliament. Although they speak of a democratically elected majority appointing a government, they called on all political forces to engage in dialogue.

“Following the Parliamentary elections, a democratically elected Parliamentary majority has taken important decisions including the formation of a government,” the joint statement reads.

“[W]e see and support the Parliament of Moldova, as the representative of the people of Moldova, and as the best place to discuss all political issues including controversial ones,” the five EU countries recommended.

The US State Department also appealed for political dialogue in its latest statement on the situation in Moldova.

State Department spokeswoman Morgan Ortagus said Washington "calls on all Moldovan parties to show restraint and to agree on a path forward through political dialogue."

On a slightly different note, Russia's foreign ministry said on June 10 it welcomed the formation of a ruling coalition and government in Moldova, and hoped to restore good relations between Moscow and Chisinau.