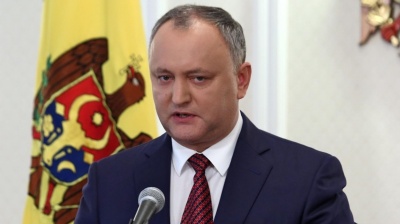 Socialist leader Igor Dodon is being investigated on several counts including treason.
By Iulian Ernst in Bucharest July 21, 2022

Former Moldovan president Igor Dodon would win a presidential election, albeit by a thin margin, while his Socialist Party — in partnership with the Communists — would be the largest political block in parliament, according to a poll conducted by Romanian agency IMAS.

The outcome is surprising, especially as Socialist leader Dodon is being investigated on several counts including treason. However, the difficult economic situation (inflation has surpassed 30% y/y) and the bleak outlook partly explain the lower support for the authorities in Chisinau despite their outstanding performance in bringing the country closer to EU membership. Moldova, along with Ukraine, was given EU candidate status in June.

Slow progress on the overhaul of the justice system is another issue. The sluggish investigations, as in the case of former general prosecutor Alexandr Stoianoglo, also goes some way to explaining the lower confidence enjoyed by current President Maia Sandu’s Party of Action and Solidarity (PAS) compared to the Socialists and to its electoral score last summer when it gained the majority of seats in parliament.

A court in Chisinau placed Dodon under house arrest for 30 days in May, at the request of prosecutors who are investigating him for embezzlement, money laundering, treason and illegal financing of his Socialist Party. His house arrest was later extended for another 30 days, and in June he was indicted over a 2008 electricity procurement contract suspected of causing losses of $11.9mn to state power company Energocom.

Dodon remains a high profile figure, and while under arrest at home, he gave an interview to Russian media expressing pro-Russian and anti-EU views.

With the support of 42.5% of those who expressed an option, the Bloc of Socialists and Communists (BCS) would get 47% of the seats in parliament, as a series of small parties fail to meet the electoral threshold.

The PAS would get only 35% of the seats as 30.7% of those who provided an answer preferred the pro-EU party of President Sandu.

The third party that would receive more than 5% of the votes would be the Shor Party (15.5% of respondents). Like the Socialists, its leader has been plagued by scandal. Ilan Shor, one of the main suspects in Moldova’s so-called ‘$1bn bank frauds’ fled the country in 2019.

15% of those polled failed to indicate a party.

As regards the electorate’s preference for potential presidential candidates, Dodon leads with 25.4%, followed closely by Sandu (24.4%). No other pro-EU candidates received more than 1% of the votes.