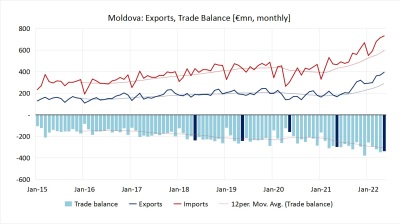 The deterioration was the effect of higher prices paid by the country that is totally dependent on imports of natural gas and petroleum products. The gap would have been wider, but the exports of cereals, oilseeds and edible oil increased significantly.

Moldova’s exports, in the first five months of the year, surged by 70% y/y (+$770mn) and reached $1.88bn. A small part of the increase was due to some $100mn of oil and petroleum products imported by a CIS member country (possibly Belarus, BNS data provides no hint) through Moldova.

The largest part of the rally seen in Moldova’s exports was due to higher exports of cereals, oilseeds and vegetable oil: the combined exports surged to $710mn, in the first five months of the year from less than $160mn in the same period of 2021. The imports increased at a moderate rate and Moldova’s trade surplus for the three items increased by over $500mn to $575mn in January-May.

Consumer prices rose 22.5% y/y in November, accelerating from a 21.1% increase in the previous month.

The National Bank of Ukraine will keep the key policy rate unchanged at 25% per annum, the bank stated in a report on December 8.