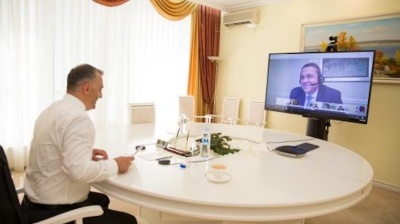 Moldovan officials are holding remote discussions with an IMF team.
By Iulian Ernst in Bucharest July 9, 2020

The Moldovan government is in remote negotiations with the International Monetary Fund (IMF) with the aim of securing a new arrangement with a $550mn financial package attached. Chisinau also hopes for a new €100mn macro-financial assistance (MFA) agreement with the EU.

If it manages to agree the $550mn financial package with the IMF, the biggest part of the funds would be used to finance the budget deficit, and a small part would be used to increase the foreign currency reserves of the National Bank of Moldova.

"The financial support on behalf of IMF is essential for Moldova, the economy of which was clearly hit by the COVID-19 pandemic. We are ready to discuss and fulfill those several important points provided for in the agreement on financing and to continue the cooperation. Especially that the last programme with IMF was carried out successfully,’’ Prime Minister Ion Chicu said, according to a government statement.

Negotiations are going ahead despite the political uncertainty in Moldova, where Chicu’s Socialist government recently lost majority support in parliament.

In an unusual move, the IMF team has involved other political forces in the talks in order to address the high political volatility in the country, Mold Street reported.

Moldova successfully completed its last IMF arrangement one this spring with $235mn disbursements including a supplementary portion decided strictly with the purpose of addressing the effects of the coronavirus  (COVID-19) crisis.

Chisinau hopes the memorandum of understanding (MoU) that will be negotiated by the two parties will be endorsed by the Fund’s board in September.

In separate news, the government of Moldova approved procedures for initiating negotiations with the European Union for a new €100mn MFA agreement.

However, out of the previous MFA agreement that expires this month only the first tranche was disbursed. Moldova needs to complete certain requirements that need the parliament’s approval — but opposition lawmakers are boycotting the legislative body’s sessions.

The agreement on the new MFA provides for a loan of €100mn, in two equal instalments, to support Moldova in the current economic situation. The disbursement of the first tranche is conditioned by the signing of the MoU; the second tranche will depend on the progress in the implementation of 6 actions provided by the memorandum.

The objective of the MFA is to reduce Moldova’s external financing constraints and to attenuate the balance of payments and the needs of the budget.

Some of these conditions have been taken over from the third tranche of the current funding programme, which expires this summer, according to the decision passed by the government. This implies that the second tranche, for which the conditions were met, can still be disbursed.

The official delegation from Moldova that will negotiate the agreement with the EU will be led by the Minister of Finance Serghei Puscuta.

Russian President Vladimir Putin and US President Joe Biden had their first phone conversation and agreed to extend the START II arms control treaty for another five years, the Kremlin said in a statement.

The state-owned Ukrgasbank bank signed off on a €30mn loan from the International Financial Corporation (IFC) on January 25, as part of the bank’s preparations for privatisation.

New government will be equally balanced between Reform and Centre, and by gender, and has many new faces.