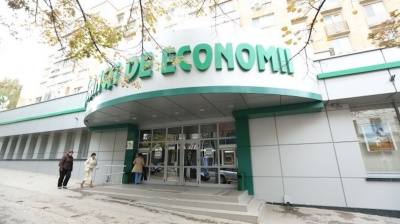 The now defunct Banca de Economii, one of the three banks targeted in the $1bn bank frauds.
By Iulian Ernst in Bucharest March 6, 2020

Moldova’s prosecutor general’s office announced that it conducted criminal investigations at the headquarters of the National Bank of Moldova (BNM) on March 5, in connection to “the bank fraud”, and subsequently arrested three current and former top management members, as well as taking preliminary steps to arrest a former central bank governor.

The "grand theft" or the $1bn bank fraud refers to the siphoning of some $1bn mainly from three Moldovan banks over several years, which surfaced in 2014-2015 when the central bank extended a MDL13bn ($1bn) emergency loan with government guarantees, later converted into public debt. The three banks were further liquidated.

On March 5 prosecutors arrested deputy governor of the central bank Aureliu Cincilei and former deputy governor Emma Tabirta, and informed former central bank governor Dorin Dragutanu about the accusations while taking the necessary steps for arresting him. As regards the fourth central bank official, the information is contradictory. Head prosecutor Alexandru Stoianoglo said in the morning that he approved the arrest of four central bank officials, namely the three plus deputy governor Ion Sturzu. But the official release later in the day indicated that the fourth official who was arrested is the head of a division, identified by media sources as head of the banking resolution division Ion Ropot.

Dragutanu was central bank governor from 2009 to 2016. Anti-graft officers conducted searches at his home in December 2019.

Tabirta was deputy governor from 2008 to 2015, during which time both the $1bn fraud and the “Russian Laundromat” occurred. The latter involved a huge money laundering operation of $20bn that took place in Moldova. Tabirta has been investigated by prosecutors for involvement in the Russian Laundromat but she was not indicted.

“The operations took place in the context of the investigation of the bank fraud and resulted in the preventive detention of three persons, among them: a current and a former deputy governor, as well as a chief of staff from the BNM. They are suspected of participating in fraud and money laundering, both crimes committed in very large proportions," the press release from the prosecutor general's office reads.

The main suspect in the scandal is businessman Ilan Shor, identified as the “visible beneficiary” of the frauds and given a 90-month sentence in June 2017. However, while he waited for his appeal to be judged, Shor remained at large. He managed to be elected first as the mayor of Orhei, and later to the Moldovan parliament in the February 24 general election. He fled the country in summer 2019 after the change of government in Moldova.

Former Moldovan prime minister Vlad Filat was sentenced to nine years in prison for passive corruption and influence peddling in a case related to the frauds, but released early in December 2019 after serving just three years of his sentence.

The investigations related to the bank fraud will continue and other top public servants involved will be indicted as well, prosecutors announced on March 5.

With reference to the investigation actions carried out by the prosecutors, the BNM said in a press release that “it cooperated to the full extent of its ability with the investigation bodies during the last years, in the investigations instituted and files concerning the banking sector and provided all existing materials, documents, expertise, explanations etc. and will continue to fully cooperate with them.”

The BNM said that it puts its hope and trust in the conduct of an objective and professional investigation, which will identify those really responsible for the banking fraud.

At the same time, the BNM said that it relies on the fact that the investigations will not affect the central bank’s capacity to exercise its supervision duties.

Separately, the BNM expressed its deep concern over the public declarations and actions, which have increased recently, undermining the morale of the institution’s employees and the central bank's capacity to exercise its functions in a professional and independent manner.