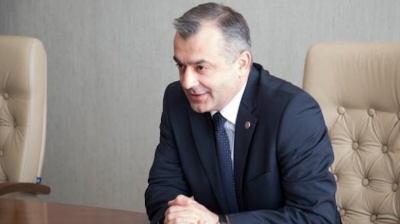 PM Ion Chicu initiated a diplomatic row with Romania by stating in a Facebook post that Romania is the most corrupt country in Europe.
By Iulian Ernst in Bucharest May 25, 2020

Moldova’s Prime Minister Ion Chicu initiated a diplomatic row with Romania by stating in a Facebook post dated May 22 that Romania is the most corrupt country in Europe, and that the Romanian city of Suceava has "half of the COVID-19 patients registered in the whole" Republic of Moldova.

Moldova and neighbouring Romania are usually very close allies, but their relationship has deteriorated since Chicu, a former adviser to pro-Russian President Igor Dodon, came to power last year. Romania has repeatedly stressed over the last few months that it maintains the support for the population of Moldova, including by sending a team of medical staff to help the Moldovan hospitals, but not for the ruling coalition that abandoned the European integration path.

Chicu's post was a reaction to a statement by Romanian MEP Siegfried Muresan, the chairman of the European Parliament delegation to the EU-Moldova Parliamentary Association Committee. Muresan wrote on Facebook on the same day that the Moldovan government has failed to manage the coronavirus (COVID-19) crisis because it hasn't implemented reforms.

The European Parliament's rapporteur for Moldova, Dragos Tudorache, pointed out on May 23 that there were only two days left until the expiration of the term assumed by the government in Chisinau to fulfil its commitments to unblock a new tranche of European financial support (the €100mn macro-financial assistance).

The EP official stated that Chicu's statements against Romania are either "cheap populism" or a "political order".

Romania's Ministry of Foreign Affairs (MFA) in its turn described the statements about Romania, which were posted on Facebook by Chicu, as "completely unacceptable". According to the MFA, these statements denote "a deep lack of respect" for Romania and the privileged bilateral relationship of the Strategic Partnership for European Integration of the Republic of Moldova.

If confirmed by the final results, PM Andrej Plenkovic's HDZ would fall short of an absolute majority but be in a strong position to form a new government.

The National Bank of Ukraine was in damage control mode on July 3 as it lionised its departing governor, Yakiv Smolii, and released more details of why a planned issue of a 12-year $1.75bn Eurobond was immediately cancelled on the news.

The country has reported a significant rise of new confirmed cases with around 80% of them in Belgrade in the last few days.

Preliminary results show clear victory for HDZ in Croatian general election
5 hours ago
NBU lionises Smolii, clarifies cancellation of Eurobond decision
1 day ago
Serbia declares state of emergency in Belgrade as coronavirus cases spike
1 day ago
No protests, but police continue to randomly arrest pedestrians on Belarus Independence Day
1 day ago
Governor Smolii’s departure from the NBU creates the risk of devaluation of the hyrvnia or default on its debt this year
2 days ago