Moldovan president calls for all Russian troops to leave the country 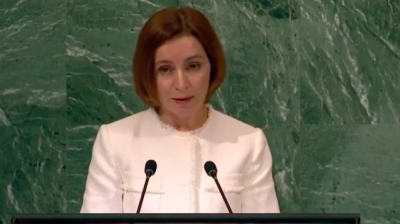 At the UNGA, President Maia Sandu calls for the "complete and unconditional withdrawal of Russian troops" from Moldova. / presedinte.md
By bne IntelliNews September 22, 2022

“We ask for complete and unconditional withdrawal of the Russian troops,” President of Moldova Maia Sandu stated in her speech before the plenary session of the United Nations General Assembly on September 21.

Russia has two kinds of troops in the separatist region of Moldova, Transnistria, which it has backed economically and militarily since the early 1990s. However, Sandu made no separation between the illegally stationed GOTR troops and the so-called peacekeepers that have a debatable status.

Separately, most of the residents in the separatist region hold Russian passports — which makes them subject to the “partial mobilisation” declared by President Vladimir Putin.

“The illegal presence of Russian military troops in the Transnistrian region violates our neutrality and increases the security risks for our country,” Sandu said.

“We call on the complete and unconditional withdrawal of Russian troops. We call on the destruction of ammunition from the Cobasna stockpiles, which pose a security and environmental threat to the region as a whole.”

Sandu detailed the toll the war in neighbouring Ukraine has had on Moldova commenting” “Our resources are strained, investments have slowed down, trade and transport routes are disrupted, inflation is nearing 35%.” She also pointed to the “wide spectrum of hybrid threats” and the Europe-wide energy crisis caused by “Russia’s attempts to weaponize gas and oil supplies”.

At the same time, Sandu stressed her country’s solidarity with Ukraine which goes beyond humanitarian aid.

“Ukraine is fighting today to keep us all safe, to keep Europe safe,” she said.

A third message conveyed by Sandu was that Moldova’s authorities are striving to achieve mutual understanding among the country’s residents of various ethnicities or political preferences.

“I represent here the citizens of the Republic of Moldova: regardless of the language they speak — Romanian, Ukrainian, Russian, Gagauz or Bulgarian,” Sandu said. “[W]hether we live on the right bank of the river Nistru, or in the breakaway region of Transnistria, we all want peace.”

The head of state emphasised that its recently secured EU candidate status offers Moldova hope, a clear direction, a unifying objective, an anchor and a strong sense of belonging to the free world.

CENUSA: Bringing Ukraine, Moldova and Georgia closer to the EU: a multi-speed progress.
COMMENT: The new Cold War will be different, and not only because of China
INTERVIEW: Helen Rodwell, head of CMS’ corporate practice in CEE