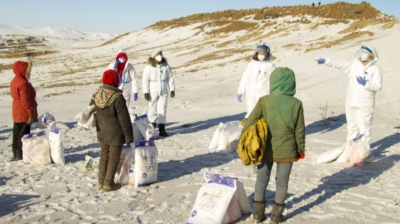 The Mongolian Red Cross is supplying food aid across Mongolia.
By Anand Tumurtogoo in Ulaanbaatar January 13, 2021

The Red Cross has forecast that the extreme winter under way in Mongolia is set to be one of the worst on record and the most challenging for a decade.

Mongolia’s National Agency for Meteorology and Environmental Monitoring, meanwhile, has warned that more than 60% of the country is at risk of experiencing an extreme winter, with temperatures forecast to plummet to extreme lows of -50C for days on end. On January 12, local media reported that more than 500 Bactrian camels had so far been killed amid the extreme winter cold in the central Mongolian province of Uvurkhangai. Other regions have reported rapid death rates among small livestock this winter season.

Mongolia’s extreme winters in which large numbers of livestock perish are known as dzuds (or zuds). They threaten the health and livelihoods of thousands of Mongolian herders living in the country’s remote central and southern provinces. A dzud is caused by the double impact of drought in the summer followed by harsh winter conditions. Without summer rain, the grass does not grow and millions of livestock cannot put on enough weight to survive the winter. Herders are unable to stockpile sufficient harvests to feed the animals.

Mongolian Red Cross Society secretary general Bolormaa Nordov said: “Dzuds are devastating for the herder families who rely on their animals for almost everything, whether it’s meat and milk for food or the cashmere and skins they sell to buy supplies or pay school fees. Losing their animals means they can quickly fall into poverty.”

Experts note how dzuds force herders to move to urban settlements and leave their livelihoods behind.

The unwelcome news of the coming dzud has triggered the release of nearly 290,000 Swiss francs (about $314,000) from the International Federation of Red Cross and Red Crescent Societies (IFRC) disaster relief emergency fund. This will allow the Mongolian Red Cross to support 2,000 herder families in a bid to prevent major stock and economic losses through the distribution of cash grants and animal care kits.

The release of these funds come as part of the IFRC’s forecast-based financing approach.

COMMENT: Why critics are asking if Inner Mongolia is the next Tibet or Xinjiang

COMMENT: Why critics are asking if Inner Mongolia is the next Tibet or Xinjiang
Mongolia’s pitiless dzud
COMMENT: Mongolia is an island of democracy

German national carrier Lufthansa is seeking to arrange dedicated flights to Moscow so wealthy Germans can avail themselves of Russia’s Sputnik V vaccine in what would be a huge publicity coup for the Kremlin, bne IntelliNews can reveal.