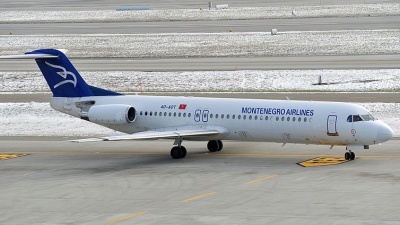 At the end of May, Serbian air traffic control (SMATSA) decided to ban Montenegro Airlines from landing at Belgrade airport, which added to rising tensions between the two countries in the past months and came in response to Podgorica’s decision not to open its borders to Serbia.

“[T]his is the best route. We cannot imagine our survival without this line,” Ristic said.

He added that many clients are interested in the Podgorica-Belgrade route and it contributes significantly to the country’s tourism development.

Montenegro Airlines has been among the most indebted Montenegrin companies for years. It has survived thanks to state aid but still has significant accumulated debts.

Belgrade used the ban on Montenegro Airlines as a tool to put pressure on Podgorica and force it to change its decision not to allow Serbians to enter Montenegro without a mandatory 14-day quarantine.

The latest round of the conflict erupted after on May 25 Montenegro’s Prime Minister Dusko Markovic declared the country coronavirus-free and said the government is considering opening its borders for several countries. Neither Serbia nor Bosnia & Herzegovina were on the list.

Podgorica has said it would open the borders only for countries where the spread of coronavirus seems to be contained, including Albania, Austria, Croatia, the Czech Republic, Germany, Greece, Hungary, Poland and Slovenia. Markovic has indicated that the country might open its borders for other countries in the region too. The government decided that borders will be opened for countries where there are no more than 25 infections per 100,000 people, which is not the case in Bosnia and Serbia for the moment.

COMMENT: Why the Balkan region should be on investors’ radar screens
Alaco Dispatches: Western Balkans’ Labour Pains
Albania has some of the least affordable internet in the world

Ladies' Night as Belarus protests go into day four
13 hours ago
500 Belarus IT CEOs threaten to move their business out of the country unless violence ends, new elections are held
14 hours ago
Iran hails claimed coronavirus vaccine breakthrough
1 day ago
EBRD seriously concerned by indictment against Moldova’s Victoriabank
1 day ago
Opposition leader Svetlana Tikhanovskaya forced to leave Belarus as protests go into their third day
1 day ago