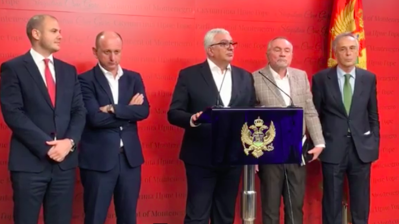 The political parties that formed a short-lived ruling majority following the August 2020 general election have agreed to join forces again and elect a new government, Andrija Mandic, one of the leaders of the pro-Russian Democratic Front, said on September 2.

After the 2020 general election, 20 parties varying from pro-Russian to pro-Western formed a ruling coalition with the common goal of ousting from power President Milo Djukanovic's Democratic Party of Socialists (DPS), which had ruled the country for over three decades. However, that coalition collapsed less than 18 months after its formation and the then government led by Zdravko Krivokapic fell.

It was followed by a minority government under outgoing Prime Minister Dritan Abazovic, which was supported by the DPS and ethnic minorities' parties. This government lost a no-confidence vote after signing an agreement with the Serbian Orthodox Church in the country. The agreement angered the DPS, which withdrew its support, bringing down the government just three months after its election.

At a press conference, live broadcasted on the DF’s Facebook page, Mandic said the parties have decided to return to their common goals and try to rule together again.

"What has happened is that in a good atmosphere we found [again] the common ground that brought us together after the 2020 election, reminding us of the time of the fight against Milo Djukanovic's regime, today we were able to agree,” Mandic said.

“We have undertaken some obligations that are not an integral part of this political agreement and in the coming days we shall start discussions to define other elements,” he added.

Mandic also said that the country still has a parliamentary majority and will have a new government. The parties signed a new agreement to join forces again at the end of the September 2 meeting.

“In this agreement are included very clear and precise steps that would lead to formation of a new-old majority. We hope that there will be no surprises in this process,” Goran Danilovic of United Montenegro said at the press conference.

The agreement will be signed by all 41 MPs of the 20 political parties. Montenegro’s parliament consists of 81 MPs.

At the end of August, the DF has suggested that Mandic should be nominated for prime minister and the ruling coalition from 2020 restored. The DF claims it is ready to respect all international obligations of the country, suggesting it would not abandon the country’s Nato obligations, nor it would lift sanctions against Russia.

Meanwhile, the European Union’s enlargement working group will discuss the political situation in Montenegro on September 6.