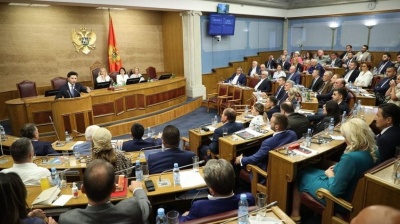 Montenegro’s government led by PM Dritan Abazovic failed to survive the no-confidence motion in the parliament in a vote in the early hours of August 20, the parliament announced.

The fall of the government will trigger snap elections unless the parties in the current parliament — which include numerous small parties and coalitions — can manage to form a new cabinet.

The motion was filed in early August by President Milo Djukanovic’s Democratic Party of Socialists (DPS)  – the largest party in parliament, which had previously backed the government of Abazovic, leader of the United Reform Action (URA). However the DPS withdrew its support after Abazovic signed an agreement with the Serbian Orthodox Church in the country, which aims to resolve a dispute that started back in 2019 when the then DPS-led government adopted a controversial church law.

Before the vote, Abazovic filed a proposal for a government reconstruction but was rejected by the parliament. The government was overthrown in a 50 to one vote in the 81-seat parliament.

“Everything that happened tonight is a result of an agreement between the DPS, President Djukanovic and head of Democrats Aleksa Becic, which is legitimate in politics, but it is important for citizens to know it,” Zoran Mikic, executive director of URA was cited by RTCG following the vote.

“I think many things are clearer now. I congratulate the new coalition of Aleksa Becic and Milo Djukanovic and I hope they will quickly agree on a new government,” Abazovic said in his first statement after the no-confidence vote, according to RTCG.

Abazovic said he is proud of everything the government has done in its first 100 days.

However, the outgoing PM said that URA will not participate in the new government if it is formed before the new elections.

Abazovic said before the vote that he did not sign the Church agreement because of his position, but because of the people and the need for reconciliation, especially among the Orthodox people.

The church law adopted three years ago, according to its critics, would have taken property from the Serbian Orthodox Church, which is the largest church in the country.

While filing the no-confidence motion, the DPS said that Abazovic irresponsibly led to an escalation of tensions and the government lost its legitimacy.

Two-thirds of Montenegro’s population of around 620,000 are Orthodox Christians and the main church is the Serbian Orthodox Church.