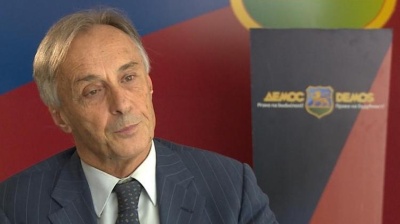 Miodrag Lekic, the leader of the civic Demos party, will be nominated as Montenegro's next prime minister. / Demos
By Denitsa Koseva in Sofia September 19, 2022

Montenegro’s ruling coalition has agreed to nominate Miodrag Lekic, the leader of the civic Demos party, as the next prime minister, Andrija Mandic, one of the leaders of the Democratic Front, said on September 19.

The decision was taken following tensions among the 20 parties forming the ruling coalition, as outgoing Prime Minister Dritan Abazovic, who is also the leader of the URA party, has said he would not back Lekic’s nomination.

“41 MPs have only one candidate for mandate holder and this is Miodrag Lekic. We have all given today our support and we have all agreed to inform the president of Montenegro to give the mandate to Lekic,” Mandic said at press conference broadcasted by RTCG.

He added that the mandate should be given by President Milo Djukanovic by the end of the day.

The ruling coalition consisted of 20 parties varying from pro-Western to pro-Russian that were united by the common goal to oust from power Djukanovic's Democratic Party of Socialists (DPS) that had ruled the country for over three decades.

The coalition collapsed due to its differences, bringing down the government of Zdravko Krivokapic. It was followed by a minority government led by Abazovic that was elected in April with the support of the DPS. However, Abazovic lost a no-confidence vote three months later, after angering DPS with the signing of a fundamental agreement with the Serbian Orthodox Church in the country.

Mandic said that the parties are yet to refine their renewed coalition agreement that will include detailed measures the next government should implement.

The distribution of seats in the next government will be equally divided between political parties with Lekic having the “golden vote”.