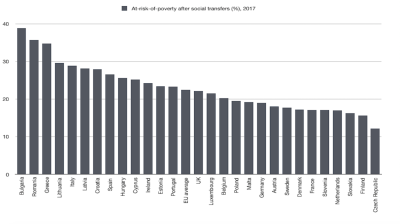 More than a third of the population in Bulgaria and Romania was at risk of poverty or social exclusion last year, Eurostat data showed on October 16.

According to the study, 38.9% of the Bulgarians and 35.7% of the Romanians were at risk of poverty or social exclusion.

The at risk of poverty rate is the share of people whose total household income (after social transfers, tax and other deductions), available for spending or saving, is below the at risk of poverty threshold, which is set at 60% of the national median equivalised disposable income after social transfers. In Bulgaria, the annual national median equivalised disposable income was BGN7,022, while in Romania it was RON12,314.

According to Eurostat, 23.6% of Romanians and 23.4% of Bulgarians were at risk of income poverty last year. The shares of those severely materially deprived were even larger, of 30% in Bulgaria and 19.7% in Romania.

There was also a considerable risk of poverty in the southern European economies that were hit hard by the international economic crisis of the late 2000s. Greece (34.8%), Italy (28.9%) and Spain (26.6%) were all among the EU countries with the highest share of the population at risk of poverty or social exclusion. Alongside them were two of the Baltic states, Lithuania (29.6%) and Latvia (28.2%), and Croatia (27.9%). 10.3% of Croats were severely materially deprived, Eurostat said.

At the other extreme, the Czech Republic had the lowest share of the population at risk of poverty or social exclusion, just 12.2%. The proportion was also low in third ranked Slovakia (16.3%), which came in just being Finland (15.7%).

In the SEE region, Slovenia reported the lowest at risk of poverty rate last year, of 17.1% (down from 18.5% in 2008). According to Eurostat, only 4.6% of Slovenians were severely materially deprived.