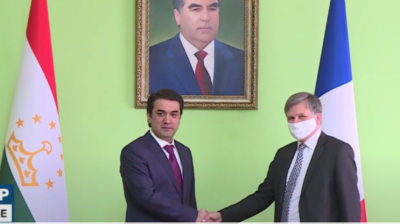 Much of Tajikistan's March 18 evening news bulletin focused on the doings of Emomali Rahmon's son Rustam Emomali. Rahmon is seen in the portrait on the wall.
By bne IntelIiNews March 19, 2021

Tajikistan’s Emomali Rahmon has been absent from public view since March 10, leading to the inevitable speculation as to the health and whereabouts of the 68 year-old president of three decades.

The disappearance is unusual in that the strongman tends to bolster his public presence in the run-up to Nowruz, the Persian New Year centred around the spring equinox, which this year falls on March 20. This time round, the oversight of Nowruz events appears to have been delegated to Rahmon’s 33-year-old son, Rustam Emomali, the Senate speaker and mayor of the capital, Dushanbe. Thus, it might simply be the case that Rahmon is getting the Tajik population more used to his son, given that it is typically thought that Rustam is being groomed to succeed his father as president.

Eurasianet’s Central Asia editor Peter Leonard, writing on Twitter on March 18, observed that no clear new images of Rahmon in public have been issued by the presidential press office since March 5.

Leonard pointed out that the metadata of the freshest photo (seen below), from March 10, when Rahmon was meant to have been presiding over a reshuffle of security officials, bears the date July 2014. 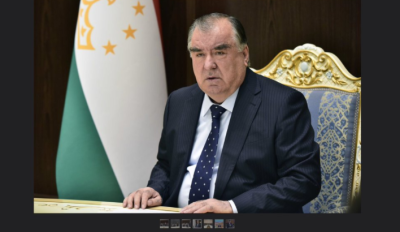 “Another bit of misdirection occurred some days before, when the press office tried to pass off Women's Day greetings apparently photographed on March 5 as having been photographed on March 7,” Leonard tweeted, adding that even if the low profile was part of the “succession business”, it was “striking that he would disappear altogether”.

Bracing for the possibility

Though the disappearance of Rahmon may be odd, it is still too early to conclude that anything grave is afoot. Nevertheless, it is not uncommon for Central Asia analysts to brace for the possibility of a dictator's death. That’s especially been the case since the September 2016 passing away, following a massive stroke, of the long-ruling Uzbek autocrat Islam Karimov which came as a shock to many. Karimov's health was never discussed by government officials and any information was closely guarded. As a demonstration of his enduring health, Karimov each year used to dance in public to a rhythmic folk song during holiday festivities.

In August 2019, stories spread that Turkmen officials were covering up the death of President Gurbanguly Berdimuhamedov when he failed to make an appearance for around five weeks. But he suddenly resurfaced to make a speech at an economic forum, leaving those who believed rumours that he had died of acute renal failure with egg on their face.

In October, Rahmon officially won 90.92% of the vote in the presidential election, securing him a fifth presidential term. Speculation that he would stand aside in favour of his son proved ill-founded.

Rahmon came to power in 1992. He is known as the only post-Soviet autocrat to have held office longer than Belarus's Alexander Lukashenko.