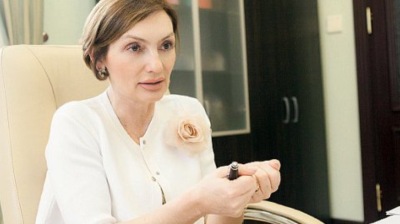 National Bank of Ukraine (NBU) First Deputy Governor Kateryna Rozhkova headed the team that carried out the highly successful clean-up of the banking sector.
By Ben Aris in Berlin March 19, 2021

National Bank of Ukraine (NBU) First Deputy Governor Kateryna Rozhkova, who spearheaded the highly successful clean-up of the banking sector in recent years, has been accused of treason and embezzlement charges in connection with her role in the nationalisation of PrivatBank, the Kyiv Post reported, citing unnamed sources.

Rozhkova told Bloomberg that she’s “astonished” to hear of the probe.

The staff of the NBU have been in the firing line since Ukrainian President Volodymyr Zelenskiy took office in April 2019 and oligarch Ihor Kolomoisky returned from self-imposed exile in Israel.

PrivatBank belonged to Kolomoisky until it was nationalised following a scandal provoked by a bne IntelliNews cover story in November 2016 “Privat investigations” that detailed how the bank’s loan book was riddled with related party loans. The former NBU governor Valeriya Gontareva decided to nationalise the bank a month later, which led to a $5bn bailout to prevent the bank from collapsing. Kolomoisky promptly left the country and the money taken out of the bank has never been recovered.

Kolomoisky has mounted a sustained legal campaign to have the bank returned to its former owners following his return, or a payment of $2bn in compensation. At the same time, the NBU staff have been subjected to a sustained chain of attacks, including the burning down of Gontareva’s house and the torching of her daughter-in-law’s car. The NBU has branded attacks on its staff and Gontareva as a “terror” campaign and accused Kolomoisky by name as being behind the attacks.

Gontareva quit after a coffin with a mannequin in her likeness was delivered to the door of the central bank and her replacement Yakiv Smolii unexpectedly quit on June 2 last year citing “systemic political pressure” as the reason for his departure. Smolii was replaced by Kyrylo Shevchenko, who stripped Rozhkova of her banking reform functions and has sidelined the members of the team that did most of the work under the previous two governors.

Rozhkova has become an outspoken critic of the way the NBU is run under the new management and only last week gave a controversial interview to NV.ua saying that the resumption of the stalled IMF deal would not happen if the current policies continued.

If the treason and embezzlement charges are brought against Rozhkova and other senior members of the bank’s staff, as reported by the Kyiv Post, then that would represent a significant scaling up of the conflict.

According to the report, Rozhkova and other staff members are being investigated for sharing information with companies including Kroll Inc., which helped look into a $5.5bn fraud at Privatbank before the government took it over, the newspaper reported.

Following the publication of the bne IntelliNews article the local press took up the story and more of the companies listed in PrivatBank’s loan book, the details of which were leaked to bne IntelliNews, were also identified as related party vehicles. Consultancy firm EY’s audit of PrivatBank was scrutinised by the NBU, which had signed off on the bank’s accounts, and found wanting. The firm subsequently was threatened with having its licence withdrawn for failing to catch the massive fraud.

The NBU then brought in corporate sleuths Kroll to do a forensic audit of PrivatBank’s books and track down where the $5.5bn was sent. On the basis of this investigation court cases have been opened in London and more recently in Cyprus, which were the main conduits for the withdrawal of bank’s capital. In addition, the US Justice department has been investigating Kolomoisky after it was discovered that hundreds of millions of dollars had passed through Cleveland. The London court has also frozen $2bn worth of Kolomoisky assets as part of the case.

Now an investigation is focusing on the decision to hire Kroll to find out where the missing funds have gone. The case has been “revived” by central bank Governor Shevchenko or someone in President Volodymyr Zelenskiy’s office, the Kyiv Post said.

“I would remind everyone here that from the perspective of foreign investors, and I think the IMF/G7, the NBU became the number one reform institution in Ukraine, and because of the hard work of Rozhkova, but also Gontareva, Smolii, Rashkovan, et al. It became a bastion of reform, of competency, and example for others to follow. It showed that Ukraine was absolutely reformable,” Tim Ash, senior sovereign strategist at BlueBay Asset Management, said in a note to clients. “Unfortunately, what we now see is backtracking, and seemingly someone in the administration is eager to oust the likes of Rozhkova. Why? Whose agenda does that serve? Methinks the old school oligarchs.”

It is not clear what Shevchenko’s relationship is with Kolomoisky, but both Gontareva and Smolii were no friends of the oligarch, whereas Ukrainian President Volodymyr Zelenskiy has long-standing business ties with the oligarch and earns royalties from Kolomoisky’s TV stations, which continue to run his comedy shows. According to local reports, Zelenskiy called Smolii into his office and fired him personally last June.

“This investigation, if true, looks both odd and inconsistent, as it’s clear the Privatbank case is crucial for the country,” Rozhkova told Bloomberg by phone. “The reason for this probe is to discredit our work.”

The central bank neither confirmed nor denied the report, saying only that it provides all necessary information to law enforcement agencies in line with current legislation, without confirming whether it had been asked for anything regarding Privatbank.

The NBU said it continues to protect the legality of the decisions linked to Privatbank’s nationalisation. “Wrongdoers must be brought to account for driving the nation’s largest lender into bankruptcy,” it said.

In a statement Zelenskiy’s press service told Bloomberg that the president’s office is “concerned about the internal fights” at the central bank but “doesn’t interfere or put pressure on” the bank or on law enforcement.

Advocates General says disciplinary measures could damage judges’ independence by allowing the government to punish them for their rulings.

Russia has launched the one-shot Sputnik-Lite anti-coronavirus vaccine, on May 6, that it claims has a 79.4% efficacy, the Russian Direct Investment Fund (RDIF) said in a press release.

US Secretary of State Antony Blinken arrived in Kyiv to meet with President Volodymyr Zelenskiy and Ukraine’s top politicians in a show of solidarity in the face of Russian aggression.

Boyko Borissov denied accusations of links to extortion and torture made by businessman Svetoslav Ilchovski in damning testimony to parliament committee.

Valentin Inzko told the UN Security Council the challenge to Bosnia’s once multiethnic society is led by the Serb member of Bosnia's tripartite presidency, Milorad Dodik.