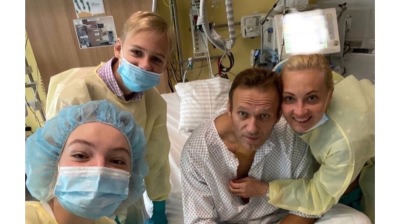 Russian anti-corruption blogger Alexei Navalny was discharged from his Berlin hospital after 32 days of treatment, and intends to return to Russia "to continue my mission."
By Ben Aris in Berlin September 23, 2020

Anti-corruption blogger and opposition activist Alexei Navalny was discharged from the Charité hospital in Berlin at the end of a month of treatment after he was poisoned with the Russian nerve agent Novichok, Berlin’s Charité hospital said on September 23.

Navalny fell critically sick on a flight from Tomsk to Moscow, where he had been to organise the opposition election campaign in regional elections. His plane had to make an emergency stop in Omsk, where doctors gave him the antidote to Novichok, that medical experts say almost certainly saved his life.

It later transpired that he had almost certainly been given the poison in his hotel room in Tomsk as traces of the deadly substance were found in a bottle of water removed from his room by his associates in Tomsk and sent to Germany for testing.

The Germans claim they have “unequivocal evidence” of the use of Novichok following tests in a military lab. The results were later confirmed by more tests in labs in France and Sweden.

Russian President Vladimir Putin claimed in a phone call with French President Emmanuel Macron this week that Navalny may have given himself the poison while on the flight home to Moscow.

“Vladimir Putin told his French colleague: 'Navalny could have swallowed this poison himself.' Good version. I believe that it deserves the closest study. I cooked 'Novichok' in the kitchen. Took a sip from a bottle on the plane. I fell into a coma,” Navalny tweeted out sarcastically after the news broke.

Charité said Navalny was discharged from in-patient care on September 22 after 32 days of treatment, 24 of which were spent in intensive care.

“Based on the patient’s progress and current condition, the treating physicians believe that complete recovery is possible,” the hospital said, as cited by the Moscow Times, but added that it was “too early” to say if he will make a full recovery.

Navalny was up and about last week, but he says that he has trouble walking and can only drink from a glass with help.

The Kremlin said in a statement Navalny is free to return to Moscow "like any other Russian citizen", and Navalny has already said that he wants to return to Russia “to continue my mission.”

In keeping with the Kremlin's tradition of not using Navalny's name, presidential spokesman Dmitry Peskov said he would welcome news that "the patient really is getting better," and wished him "a speedy recovery."

Russia maintains that Navalny was not poisoned but either had a metabolic disease or low blood sugar. Russian officials have complained that Germany won’t share its findings and that Navalny’s aides took potential evidence out of the country.