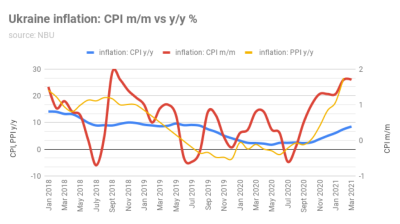 Prices jumped in March leading the National Bank of Ukraine to hike rates. With price rise pressure still on the central bank is expected to hike rates again this week
By bne IntelliNews April 14, 2021

The National Bank of Ukraine (NBU) is expected to raise its prime interest rate on April 15 in order to combat rising inflation, according to a Reuters poll of analysts, the newswire reported on April 14.

Of the 16 analysts surveyed by Reuters, 10 foresee the rate rising to 7% from the current level of 6.5% and three expect an increase to 7.5%. None expect Ukraine’s central bank to keep rates on hold.

Separately, Dragon Capital predicted an interest rate hike to 7.5% and another increase to 8% at the Central Bank’s Monetary Policy Board’s June 17 meeting. In a note to clients, Dragon predicts that inflation will peak in June at 9.8% and will end the year at 7.5%.

March inflation jumped to 8.5% y/y, which was fuelled by food and energy price hikes. Inflation is rising across Central and Eastern Europe (CEE), but the NBU was the first central bank in the region to hike rates.

The Central Bank of Russia (CBR) was second after CBR governor Elvira Nabiullina unexpectedly brought two years of easing to an end with a surprise prophylactic 25bp hike to 4.5% as Russia is also suffering from increased inflationary pressure. After falling to a pst-Soviet low of 2.3% in 2018 inflation has risen to 6% in the first three weeks of March, although analysts say prices peaked in the last week of March.

Inflationary pressures in Ukraine are higher than those in Russia and the NBU is expected to make a string of hikes this year.

Ukraine's annual inflation will reach a 1.5-year high of 8% in March 2021, exceeding the Central Bank's forecast of 7.6%, according to an earlier monthly Reuters poll of Ukrainian analysts.

Oleksiy Blinov, Alfa-Bank Ukraine’s Head of Research, said in a recent note: “These changes in external prices are directly and indirectly transmitted to consumer inflation in Ukraine.”

The IMF has predicted that Ukraine’s consumer price index will end this year at 7.9%.

Annual inflation in Ukraine sped up to 8.5% y/y in March from 7.5% y/y in February the State Statistics Service reported on April 9.

“Monthly inflation in March was higher than in the three previous years. It looks like unleashed food prices turned consumer inflation to a self-sustaining phase,” Evgeniya Akhtyrko of Concorde Capital said in a note. “A surge in prices for clothing and footwear is hard to explain as the demand for non-food retail items remains weak amid lowered consumer activity during the pandemic era. Possibly, the non-food retailers just pulled up their prices as a result of a bandwagon effect amid other fast growing consumer prices.”

Producer price index of inflation (PPI) has been rising even faster than consumer price inflation (CPI). After collapsing in 2020 to a low of -7.5% in July last year in the bowl of the coronacrisis, producer prices started to rise again from October as it became clear the vaccines were on their way and Ukraine’s economy began to revive on the back of recovering commodity prices.

Since then producer prices have risen steadily and had increased by 26.6% in February, the last data available, partly on the back of the low base effect. However, as the coronacrisis didn't kick in until May the low base effect will be even more exaggerated in the coming months so the statistics will look much worse throughout the summer.

Ukraine's international reserves increased to $28bn as of the start of May
Ukraine’s consumer price inflation slowed to 8.4% in April
KYIV BLOG: Blinken in Kyiv

Belarus' gold and foreign currency reserves rose 4.9% to $7.3bn as of May 1
2 hours ago
Ukraine's international reserves increased to $28bn as of the start of May
3 hours ago
Ukraine’s consumer price inflation slowed to 8.4% in April
3 hours ago
Romania’s retail sales up 4.1% y/y in Q1
3 days ago
ING: Inflation pressure continues to build in Poland
3 days ago