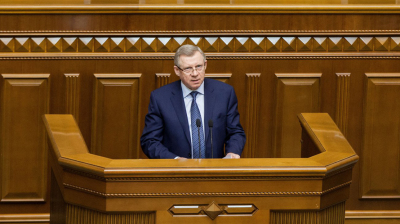 NBU Governor Yakiv Smolii told the Rada: “I leave the NBU as an integrated institution that has a strategic vision, well-established processes, a strong professional team."
By Ben Aris in Berlin July 4, 2020

The National Bank of Ukraine (NBU) was in damage control mode on July 3 as it lionised its departing governor, Yakiv Smolii, and released more details of why a planned issue of a 12-year $1.75bn Eurobond was immediately cancelled on the news.

Smolii is widely respected by investors and Ukraine’s donors. Not only is he credited with prudent monetary policy that has seen Ukraine’s inflation rate come down from over 60% when he joined the bank in 2014 to 1.7% in May; he has also successfully managed the recent crisis and even increased the central bank's reserves to just over $28bn during the crisis months.

Smolii unexpectedly quit on June 2, citing “systematic political pressure” as the reason for his departure, a clear allusion to the running battle the regulator has been fighting against oligarch Ihor Kolomoisky for control of PrivatBank. The NBU has branded attacks on its staff and former NBU governor Valeriya Gontareva as a “terror” campaign and named Kolomoisky as orchestrating the campaign.

Without Smolii’s leadership the independence of the NBU is now in doubt and investors and donors are waiting to see who will replace him. In these conditions issuing a Eurobond is impossible.

The NBU said the decision to cancel the issue, only hours after the order book had been closed, was based on the need for investors to evaluate the news about the resignation of the head of the NBU.

"Given the unexpected announcement of the resignation of the chairman of the National Bank of Ukraine, Yakiv Smolii, last night [on July 1], the Ministry of Finance of Ukraine this morning decided to cancel the previously announced offers of Eurobonds and exchanges in order to provide investors with enough time to evaluate this news,” Minister of Finance Serhiy Marchenko said.

"An extraordinary event happened yesterday [on July 1]. It was shocking and disrupted our transaction of the decade. I am not afraid of that word. Because the profit we could make from yesterday was last gained in 2007-2011,” Marchenko said in a television interview.

The International Monetary Fund (IMF) also released a statement emphasising the independence of the NBU was essential for its relationship with Kyiv. The IMF was already clearly concerned about the ongoing attacks on the NBU by Kolomoisky when it signed off on the $5bn Standby Arrangement (SBA) agreed on June 9, as bne IntelliNews highlighted in a comment, “Here is the money but we don't trust you”.

Within days of the first tranche of the new deal arriving in Kyiv two Rada deputies from the Servant of the People (SOTP) fraction, but associated with Kolomoisky, introduced a bill that would increase the government’s control over the NBU that the IMF and EU objected to. Now with Smolii’s departure those fears have only heightened.

“Under [Smolii’s] leadership, Ukraine has made important strides in achieving price stability, amply demonstrating that an independent central bank is a key element of modern macroeconomic policymaking,” an IMF spokesman said in a statement on July 2.

Likewise, the ambassadors of the G7 states issued a statement commenting on the news.

“An independent National Bank is a foundational achievement for Ukraine that has reduced corruption, driven growth and rescued a failed banking sector. To undermine this crucial institution would be a big step back and jeopardise the credibility of and support for Ukraine's reforms,” the G7 statement said.

The EU added its voice to the throng. It has been strongly supportive of Ukraine, having just transferred $500mn under its macro-stability support programme immediately after the SBA was done.

The EU warned Smolii’s resignation is a "worrying signal" and that the union stands behind an independent role for the National Bank.

Peter Stano, the lead spokesperson for foreign affairs and security policy, said in a statement on July 2: "The announcement of the resignation of the governor of the National Bank of Ukraine, Yakiv Smolii, against the backdrop of alleged political pressure sends a worrying signal. The bank must maintain its ability to fulfil its role independently. Undermining this important institution jeopardises the credibility of and support for Ukraine’s reform agenda. Ukraine’s path to reform is challenging, in particular in the current exceptional circumstances of the coronavirus [COVID-19] pandemic. The European Union will continue to support Ukraine in the implementation of much needed reforms, and counts on the Ukrainian authorities to maintain their level of commitment.”

Smolii has been credited for continuing the work of former NBU governor Valeriya Gontareva, who led the reform effort after the EuroMaidan revolution in 2014. The two have been credited with building a tight and committed team dedicated to putting in place real reforms and operating independently of politics in Ukraine.

It probably helped that both Smolii and Gontareva were independently wealthy before they took up the governorship, as both had founded successful banks – Aval and ICU respectively – before heading up the NBU.

One scenario, where the top management of the NBU quit in solidarity with Smolii, was a major fear of investors and has not come to pass. The team said in a statement that it will stay on to continue Smolii’s work under the leadership of deputy governor Kateryna Rozhkova until a new head is appointed. Rozhkova is a possible replacement, but she is not well liked in the Rada as she has spearheaded the NBU campaign to close hundreds of banks that belonged to well-connected oligarchs.

The Rada confirmed Smolii’s resignation on July 3, the last step in confirming his departure. The NBU team released a statement detailing Smolii achievements while in office that bne IntelliNews reproduces in its entirety below.

Today the Parliament approved the president’s resolution to dismiss NBU Governor Yakiv Smolii, who filed for resignation on 1 July, 2020, citing systematic political pressure. 286 Members of Parliament voted for him to step down.

“As the NBU has long been under systematic political pressure, I have made a difficult but necessary decision to resign. For months, the central bank has been pressurised to make decisions that are economically unsound, that focus on short-term, easy “victories,” and that could take a tremendous toll on the Ukrainian economy and people in the long run,” said Yakiv Smolii in his parliamentary address as he explained the reasons for leaving his post of his own volition.

“As governor, I have been safeguarding the NBU’s institutional capacity for more than two years. Together with the members of the NBU Board, we have been a shield that has protected our technocratic and apolitical institution from the influence of political forces. Over the past year, this shield has come under unrelenting pressure to give in. That includes pressure in courts, paid rallies at Instytutska Street and near the Board members’ homes, information attacks based on manipulation and lies, unfounded political assessments of the NBU’s policy and of my actions as governor, and use of the NBU Council to incite corporate conflict within the central bank. All these have been links in the same chain,” emphasised Yakiv Smolii.

“Does my resignation imply that the NBU has lost its independence? Not at all. My resignation comes as a protest. It is a signal and a warning that a red line is about to be crossed. As I step down as governor, I seek to warn politicians against further attempts to undermine the institutional foundations of the Ukrainian central bank. At this very moment, the NBU Board and several thousand top-of-the-line professionals continue to work at the NBU to promote the macroeconomic and financial stability of Ukraine and the institutional capacity of its central bank. However, it is crucial that their work goes on uninterrupted. It is imperative that the president, government and political forces finally begin to work effectively with the central bank,” said Yakiv Smolii.

Yakiv Smolii was appointed NBU Governor on 15 March 2018. The following happened during his time in office:

Today the banking system is healthy, highly liquid and profitable. Not a single bank has been resolved since November 2018, and confidence in the banking sector is being restored. Furthermore, in the midst of the current crisis, the banking system has been an outpost of financial stability thanks to what had been accomplished on Yakiv Smolii’s watch since early 2018:

Under Yakiv Smolii’s leadership, the NBU became a regulator of the non-bank financial market, optimised the banknote and coin series, ensured that the share of non-cash transactions increased to 55%, brought the launch of the NBU Bank ID to its completion, adopted the IBAN, and shifted the SEP into 23/7 operating mode.

During these two years, the central bank never stopped evolving as an institution, with the result that:

“I leave the NBU as an integrated institution that has a strategic vision, well-established processes, a strong professional team, and a good reputation among the world’s leading central banks and the international community. I’m leaving with my head held high. And I leave the NBU under your responsibility,” said Yakiv Smolii as he concluded his parliamentary speech and his nearly two years in office.