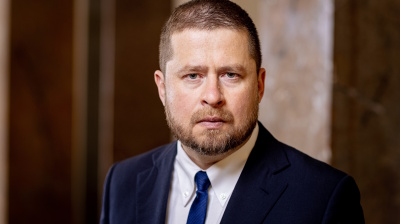 Ales Michl has been criticised by government politicians for being too close to former premier Andrej Babis.
By bne IntelliNews May 12, 2022

Czech President Milos Zeman has appointed Ales Michl, a current member of the Czech National Bank (CNB) and a former advisor of the populist ex-premier Andrej Babis, to the post of the CNB governor.

The appointment could mark a major shift in Czech central bank monetary policy. Michl, who will take charge from the July monetary council meeting, has been an outspoken opponent of interest rate hikes, arguing that it hurts Czech industry, which is already struggling with supply chain problems.

The CNB was, along with Hungary's central bank, the first in the EU to start raising interest rates last year. Last week it increased rates again to its highest level since 1999, by 0.75 percentage point (pp) to 5.75%. Michl's appointment could mean the next council in June will take the opportunity to hike rates before he takes over, according to analysts, before the tightening cycle is halted.

Michl will be the governor for the next six years (effective from July 1, 2022), replacing the current more hawkish Governor Jiri Rusnok.

"I assume that at my first board meeting that I will chair [as governor] in the summer, I will propose the stability of interest rates for a certain period of time," said Michl during his appointment ceremony, as quoted by the CNB.  "We will evaluate the impact of the current monetary policy, we will evaluate new indicators coming from the economy and after a certain period of time we will decide what to do next," he added.

"I can assure you that the CNB will remain conservative, we will fully meet the objectives of monetary and financial stability, and nothing will change in the next six years," he said. Inflation, he noted, is mostly imported, mainly through higher energy prices.

Michl together with another board member Oldrich Dedek have not been in favour of raising CNB key interest rates. "In order to stabilise inflation expectations, it is necessary to explain that they are temporarily triggered by a cost shock, which will subside when trade relations between suppliers and customers in the global economy normalise," Michl and Dedek said for the MF DNES daily last year.

"I expect inflation to continue at record highs of around 15%. My main objective will be to bring it back to 2 per cent. I expect it will take two years," Michl added, as quoted by the news agency.

According to Zeman, the CNB has an irreplaceable role in the fight against inflation. He said there are two groups of economists with significantly different views on inflation and it is necessary to listen to both groups with respect.

"I would not like to see a sharp fall in interest rates, but on the other hand, I do not believe that there are sufficient grounds for further increases [of rates] in the current situation," Zeman said. In his view, the current interest rate hikes are far from an all-powerful cure for inflation.

So far, the markets have responded negatively to the appointment of the new governor. Less than an hour after Michl's appointment, the euro was trading at around CZK25.23, while in the morning, the exchange rate was still below CZK25.

As pointed out by Ondrej Houska from the daily Hospodarske Noviny (HN), Michl has been on the CNB Board for three and a half years and he has been using his position mainly in the interests of his own visibility. "He has consistently broken the rules that should have been sacred to him – in the media (those belonging to Andrej Babis) he talked about his views on monetary policy even when he was forbidden to do so," Houska said.

"Michl also, as my colleague Ludek Vainert has reported in HN, continued to prepare documents for Babis even when he was already working at the CNB – which is in complete contradiction to the independence he should have respected as a central banker," Houska added.

He added "is it a coincidence that Zeman appointed Michl as governor? And is it a coincidence that he did it mainly at the request of Babis, as well-informed sources say? Of course it is not. The CNB is a respected independent institution. And few things are as much of a thorn in the side of populists – Zeman and Babis – as independent institutions," he said, stressing that there is an obvious conflict of interest, because Babis' indebted agrochemicals company Agrofert is interested in low interest rates.

Prime Minister Petr Fiala said he believes the new CNB governor will not change the bank's goal of price stability. He believes that the central bank will take all steps to ensure that inflation in the Czech Republic starts to gradually decline.

The Chamber of Deputies chair Marketa Pekarova Adamova said that "the Article 98 of the Constitution tasks the CNB to achieve and maintain price stability, i.e. to create a low-inflationary environment and the independence of the central bank from political power. Michl, as a former adviser to Andrej Babis, must not be tasked to make loans cheaper for Agrofert, but to assure the welfare of the country."

Babis said Michl "belonged to the sensible wing" of the bank board. "I've been saying for a long time that the CNB is making policies that are harmful to the economy, harmful to people and harmful to mortgages. Basically, the more the central bank raises rates, the higher the inflation," he stressed, inverting the normal economic relations.

According to the analysts, the appointment of Michl will mean the CNB's monetary policy approach is unlikely to be nearly as harshly anti-inflationary as it has been so far.

Miroslav Novak, an analyst at Akcenta, said the June meeting of the bank board comes with a big question mark in terms of a further increase in interest rates. "Some of the bank board members may want to proceed with a more significant increase in order to keep rates at the highest possible level before Michl takes office in July," he added, as quoted by the Czech TV.

Frantisek Taborsky, FX & FI Strategist at ING Bank, agreed. "We are yet to see another set of monthly indicators before the June meeting, but we can expect the current board to want to raise rates as much as possible, following the CNB staff recommendation. In the base case scenario, we expect at least a 100bp rate hike in June and we cannot rule out the CNB considering FX interventions in the coming weeks or increasing volumes as part of the current market activity to bring the koruna back below 25.0 EUR/CZK," he added.

The composition of other board members remains unclear. Three more seats in the board are in play over the coming weeks – Deputy Governor Tomas Nidetzky, board member Vojtech Benda and the current governor Rusnok. Both Nidetzky and Benda can be reappointed for another six-year term. Rusnok will be replaced, having reached the legal end of his term. It is speculated that the president will want to appoint someone close to the new governor in terms of approach to monetary policy and completely reverse the voting ratio on the board.

"During the press conference, the president cited opinions against raising rates from Vladimir Dlouhy (head of the Chamber of Commerce) and Petr Barton (chief economist at Natland Investment Group), but based on the words from Michl, it seems that the composition of the board after 1 July is still undecided," said Taborsky.