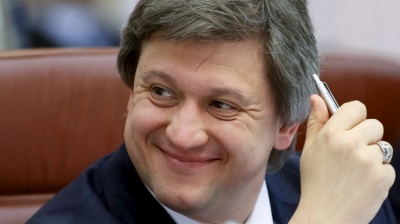 Ukrainian president Petro Poroshenko has accused the former Finance Minister Oleksandr Danylyuk of a conflict of interests in the Privatbank case
By Sergei Kuznetsov in Kyiv April 16, 2019

Ukrainian President Petro Poroshenko believes that former finance minister and liberal reformer Oleksandr Danylyuk, who has joined a team of presidential frontrunner and comic Volodymyr Zelenskiy, has a conflict of interest, as regards of the country's largest lender PrivatBank, nationalised in late 2016.

With less than a week to go before the presidential election is decided on April 21 the mud is flying and Poroshenko is trailing badly in the latest polls. The president claims the former minister is aware of the position of the state, which is trying to recover some $5.6bn allegedly stolen from the bank by its former owners, but claims Danylyuk is currently working for the government's opponents in an case the state brought against the bank’s former owners in London.

Many experts and journalists in Kyiv are speculating that Zelenskiy, a close associate of PrivatBank former co-owner Ihor Kolomoisky, is ready to de-nationalise the lender, despite the fact the state invested over $5bn into the bank – the biggest bank rescue in Ukraine’s history.

The government nationalised PrivatBank, co-owned by Kolomoisky, in December 2016 after a scandal caused by the bne IntelliNews  cover story “Privat investigations” in November 2016 exposed the extent of related party lending in the bank.

"You must understand that Mr. Danyliuk, when preparing a lawsuit to the London court, de facto secured Ukraine's position," Poroshenko's media office quoted him as saying in a televised talk-show late in the night on April 15. "Today, when he [Danylyuk] retired, he moved to the campaign, one of the leader of which is [Kolomoisky's chief lawyer] Andriy Bogdan, and it is admitted, who represents Kolomoisky in the court against Ukraine and represents Zelenskiy in the campaign."

Poroshenko added that in jurisprudence this is called a conflict of interest. "Conflict of interest means a crime. Because you, knowing a classified information about the position of the state, started working for the campaign where Mr. Bogdan, who represents Kolomoisky," he said.

Danylyuk and Zelenskiy's team did not comment of these allegations as of the morning on April 16.

Tim Ash, Senior Sovereign Strategist at BlueBay Asset Management, believes that any backtracking on Privatbank issue towards Kolomoisky would be “deal breaker” for international financial organisations. "No chance they would tolerate this $2bn," Ash tweeted on April 11. Likewise, the US embassy in Kyiv issued a warning in March that any backtracking on the nationalisation of Privatbank would not go down well with Ukraine’s donors and allies.

On April 8, Kolomoisky said that he is going to seek $2bn of compensation from the nation's government. "I don't need [to get back] PrivatBank. But there was $2bn in capital there. Let them [the Ukrainian government] return it to me and there will be no problems," Kolomoisky said in an interview with the Ekonomichna Pravda online outlet.

Valeria Gontareva, who was governor of the National Bank of Ukraine (NBU) at the time and oversaw the nationalisation of the bank, dismissed Kolomoisky’s demand for $2bn “as complete nonsense.” “The bank did not have that capital -- there was a hole of $5.5bn, which the state closed," she told Novoe Vremya Biznes on April 15. In a warning to the court, she added: “This is the biggest fraud in the history of the financial world, so the whole world is watching this case.”

But Kolomoisky still weilds a lot of clout in Kyiv from his home in Israel, where he now lives in self-imposed exile. The day after his interview with Ekonomichna Pravda the Kyiv’s Economic Court accepted Kolomoisky’s amendments to a lawsuit against Ukraine’s government in which the oligarch is demanding the full return of his 41.5% share of the bank. A similar claim was made by Triantal Investments Ltd, allegedly owned by Kolomoisky, which owned 16.5% of the shares of PrivatBank before it was nationalised.

" I think that when it is not discussed, we have a huge risk of the state," Poroshenko said, adding that the amount of the lawsuit from Kolomoisky was $5bn, while the state's claim was $2.5bn. "This is what’s at stake," the president believes.

The bank was found to allegedly have a UAH148bn ($5.6bn at the time) hole in its balance sheet because of related-party financing. In 2017, Gontareva said the post-nationalisation audit of the bank found that 100% of the corporate portfolio had been made to related parties belonging to Kolomoisky and his business partners.

Poroshenko hammered on the possible de-nationalisation of PrivatBank, claiming correctly that if it happens it would trigger a crisis and possibly affect the nation's banking system. "I am firmly convinced that Mr. Danylyuk knows very well that the issue of nationalisation of PrivatBank was one of the key issues in our cooperation with the International Monetary Fund (IMF)," Poroshenko added.

Ukraine’s banks are back in profit but they remain badly wounded and it wouldn't take much to cause a crisis. As bne IntelliNews recently reported, while banks are growing again they are suffering from high non-performing loans (NLPs) of around 50%, and more in the leading state-owned banks.

Poroshenko's statements followed his warring that possible "backsliding" in the issue of the nation's largest lender PrivatBank, nationalised in late 2016, after the presidential election will cause a deep economic crisis both in the country and in relations with international financial organisations.

"I was shocked by the requirement of $2bn compensation for PrivatBank. This question is already on the table. This is what is ahead," Poroshenko said on April 15. "They [Kolomoisky's team] are trying to do it very quickly before the presidential elections to say that it happened without their participation. It will not work."

"Sudden movements as regards the bank create certain threats to the funds of its numerous customers. The decision in favour of the former owner will be a powerful blow in cooperation with the IMF. The attempt to nationalise PrivatBank saved the funds of more than 22mn depositors," the president added.

"Backsliding on the issue of PrivatBank will cause a deep crisis in relations with the IMF. With respective risks for macroeconomic stability, for the exchange rate, it may lead to a new crisis," Poroshenko said.

Over the past years, Kolomoisky and another the bank's co-owner, Hennadiy Bogolyubov, have successfully defended against Kyiv's legal attempts to recover the loses money.

Gontereva gave the owners until August 2017 to start repaying the money withdrawn from Privatbank via the dodgy loans or “face criminal charges,” but when they didn't repay nothing happened. Danylyuk also told bne IntelliNews in an interview during the EBRD’s annual meeting that, “No one was going to be allowed to get away with stealing $5bn,” but the state has been unsuccessful in recovering any of the money so far.

Specifically, in November 2018, a London court concluded that it does not have jurisdiction over Ukraine's claims against the businessmen, who were challenging the applicability of jurisdiction of the High Court of Justice in London.

In December 2017, the same court ruled to freeze worldwide assets of the former owners, including six companies controlled by Kolomoisky and his partner Bogolyubov, worth more than $2.5bn. The court also established a weekly limit of £20,000 on Kolomoisky’s personal expenses.