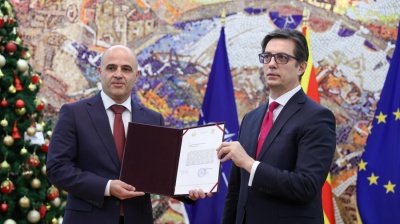 North Macedonia’s PM-designate and the new leader of the ruling Social Democrats (SDSM), Dimitar Kovacevski, has presented the new government composition to the parliament for adoption, following the resignation of the government led by Zoran Zaev.

There are some new faces in the government, from both the SDSM and its new junior coalition partner the Alternative, but opposition VMRO-DPMNE says the government is a continuation of Zaev's policies, because Zaev proposed and supported Kovacevski as new party leader (now PM designate), and is calling for snap elections.

Zaev resigned in December, prompting the resignation of the entire government following the defeat in the October local election, in which most of the mayoral posts were won by the opposition VMRO-DPMNE. Under Zaev's leadership, the country also failed to get a date to start EU accession talks, due to the Bulgarian veto.

47-year-old Kovacevski, who served as deputy finance minister, was elected leader of the ruling SDSM on December 12, after Zaev also resigned from this position.

At a short news conference Kovacevski said that the priority of the new government will be the new challenges the country is facing, such as dealing with the energy crisis, maintaining living standard in light of the crisis and implementing goals regarding major infrastructure projects envisaged for 2022.

Answering a journalist’s question, Kovacevski said that launching EU talks and solving the issue with Bulgaria, which is blocking Skopje’s EU accession process, are also strategic goals of the government, as is Open Balkan, an initiative with Albania and Serbia on the free flow of goods and services in the region.

Kovacevski said that he will pledge to solve the issue with Sofia through dialogue by building trust and finding a common solution based on EU values to preserve the dignity of both countries.

Only a few ministers from the SDSM ranks will remain in the new government, Oliver Spasovski as interior minister (despite being linked to a fake passport scandal), Blagoj Bocvarski as minister of transport and Fatmir Bytyqy as deputy prime minister in charge of economic affairs. Current Justice Minister Bojan Maricic will become deputy PM for European Affairs.

Kovacevski mainly appointed female ministers in the new government from the ranks of the SDSM. Slavica Petrovska was appointed minister of defence, Slavica Grkovska as deputy PM in charge of fight against corruption, Jovana Trencevska as minister of labour and social affairs, Bisera Kostadinova-Stojcevska as minister of culture and Nikola Tupancevski as justice minister.

There are almost no changes from the ranks of the SDSM’s ethnic Albanian junior coalition partner the Democratic Union for Integration (DUI) except for the Minister of IT Society and Administration Jeton Shakiri, who will now head the education ministry.

There will be three new ministers from the new coalition partner in the government, the ethnic Albanian the Alternative: Bekim Sali as minister for health, Admir Aliti as minister for IT society and Xhemail Cupi as minister without portfolio in charge of the diaspora.

Opposition VMRO-DPMNE has criticised Kovacevski, saying that he is only a pawn of Zaev and a faithful follower of Zaev’s policy.

“This is a government proposal submitted by Kovacevski and signed by Zoran Zaev. Today we have a composition of government that will continue ‘Zaevism’ and which has no energy for reforms, no plan for European integration and no proposals for a better life," Nikoloski said.

According to the constitution, the prime minister-designate was obliged to submit his programme and propose the composition of the government to the assembly within 20 days from the day of entrusting the mandate. The 120-seat parliament elects the government by a majority of votes.

Croatian president clashes with government over Russia-Ukraine standoff
31 minutes ago
Explosion at Albanian Football Federation head’s home after voting scandal
8 hours ago
Slovak parliament likely to approve defence agreement with the US
16 hours ago
Westinghouse corrals Polish companies to work on nuclear power plant
16 hours ago
Western allies sending Ukraine arms, but not Germany
16 hours ago