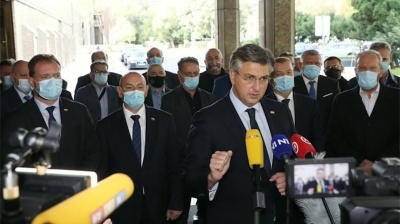 A series of “very explicit” threats have been made following the shooting of a police officer outside the Croatian government headquarters on October 12, Prime Minister Andrej Plenkovic said October 17.

A gunman opened fire outside the government headquarters in Zagreb at around 8am on October 12, seriously injuring one police officer. According to the Croatian police the attacker was a 22-year-old Croatian citizen who was not previously known to them. He killed himself after the shooting.

According to a police statement, the gunman attempted to kill three police officers, and the attack had “elements of terrorist act”.

Plenkovic said on October 17 that further threats followed the attack, made both via social media and other channels, and argued they were the result of “radicalisation and indoctrination”.

The shooting sparked a fresh war of words between Plenkovic and his political adversary, President Zoran Milanovic.

Plenkovic claimed Milanovic had sown "the seed of hatred and aggression" against him during past political battles that were later picked up by far right politicians.

Milanovic dismissed Plenkovic’s comments as "a whining session by a 50-year-old man”, as quoted by Hina. The prime minister has clashed with other politicians over the incident, including Homeland Movement leader Miroslav Skoro.

Brighter days ahead: The economic bounce back in 2021
Southeast Europe’s EU members to get biggest boost from next budget and recovery funds
Central, Southeast Europe stock markets jump in anticipation of COVID-free future