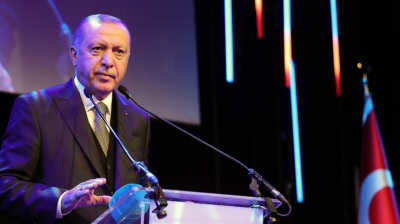 Erdogan is fuming that New York prosecutors have revived the Halkbank affair by filing an indictment.
By bne IntelliNews December 5, 2019

Turkey’s state-owned Halkbank must enter a formal plea to charges that it assisted Iran in evading sanctions before it can challenge a US court’s ability to hear the case, a New York judge ruled on December 5.

“If Halkbank wishes the district court to decide its jurisdictional motion, this international bank holds the key to unlock its dilemma: travel to New York and answer the charges or have its legal counsel do so,” US District Judge Richard Berman wrote in his ruling, Reuters reported. Halkbank would not give up its right to challenge the court’s jurisdiction by appearing and entering a plea, the judge added.

Prosecutors of the Southern District of New York (SDNY) filed the indictment on October 16, at a time when tensions between the US and Turkey were high as the latter was launching a military incursion in northeast Syria. Turkish President Recep Tayyip Erdogan, who has been implicated in the case but denies any wrongdoing, called the indictment an “unlawful, ugly” step.

Halkbank has to date refused to make a formal appearance in the case, causing prosecutors to describe it as “fugitive”.

“We disagree with the district court’s decision denying Halkbank’s motion for a special appearance, which would have allowed the Bank to challenge the court’s jurisdiction without waiving its rights,” Ana Buling, a lawyer for Halkbank, said in an emailed statement cited by Reuters. “We will carefully review the ruling with our client and consider our legal options.”

Prosecutors have alleged that Halkbank and its executives conspired between 2012 and 2016 to help Iran spend oil and gas sales revenues abroad using sham food and gold transactions, in violation of US sanctions. Turkish-Iranian gold trader Reza Zarrab, who turned state’s witness, and Turkish officials aided the effort, prosecutors said.

Judge Berman presided over the trial of Mehmet Hakan Atilla, a former executive at Halkbank, lately made chief executive of the Istanbul Stock Exchange in what was widely seen as the Erdogan administration admonishing US officials for pursuing the Halkbank case, which the Turkish president behind the scenes has previously tried to persuade both US President Donald Trump and his predecessor Barack Obama to halt. Zarrab pleaded guilty and testified against Atilla, who was convicted and sentenced to 32 months in prison.

Halkbank said in a court filing that it intends to move for Berman to recuse himself from the case. It claims the judge has “made statements both in and out of the courtroom that call into question the court’s impartiality.” The bank has not elaborated on its allegation.

Berman also ruled on December 5 that he will not consider that motion unless Halkbank formally answers the charges.

Erdogan has claimed the entire sanctions busting prosecution is the result of efforts made by his Gulenist enemies.

ING: So what is a greenium and how do we get to it?
Public banks’ share in Turkey’s domestic bonds at record high
COMMENT: Time to end Putin's impunity

Hungary’s most powerful oligarch says he is just a lightning rod for attacks on Orban
22 hours ago
US sanctions on Russia’s OFZ local debt come into force
22 hours ago
Moscow back on lockdown as coronavirus infection rate surges again
1 day ago
Lukashenko pushing illegal Iraqi refugees over the border into Lithuania
1 day ago
Belarus is the “North Korea” of Europe, says US diplomat
3 days ago