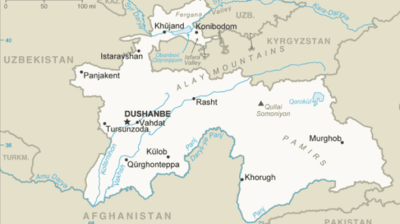 GBAO (regional capital: Khorugh), in the east of the country bordering China's Xinjiang province and Afghanistan, is home to the Pamiri people and the "Roof of the World" Pamir Mountains. / CIA Factbook, public domain.
By Aida Kadyrzhanova in Almaty May 19, 2022

Eight protesters and one policeman were killed during clashes that occurred after Tajikistan launched an "anti-terrorist operation" in the volatile Gorno-Badakhshan Autonomous Region (GBAO) region bordering Afghanistan and China, Tajik authorities said on May 18.

The operation was launched after the government said it was making efforts to quell protests in the restive region. They were prompted by anger over the lack of an investigation into the 2021 death of an activist and kidnapping suspect who was taken into police custody last November.

Detailing casualties, the Interior Ministry said that while one security officer was killed and 12 soldiers were seriously injured in a showdown with "militants" armed with weapons including Molotov cocktails, eight other people were killed and 11 wounded. More than 70 "active members of a terrorist group" were apprehended, it added. Eurasianet reported that while officials insisted that only armed men had been killed, chatter on social media described at least some of the dead as civilians.

Recent days have seen demonstrators take to the streets to demand the regional governor and mayor quit. They were accused by protesters of inaction over the death of the activist.

The ministry said the situation in the region was now "stable". RFE/RL correspondents, however, reported from the region, home to Tajikistan’s Pamiri people, that schools and state entities in Badakhshan remained closed. Internet connections across the region appeared to have been cut by the authorities while the security forces’ operation was under way.

The interior ministry spoke of "criminal groups" blocking a highway connecting Rushon district with the regional capital, Khorugh. They were described as clashing with law enforcement officers for a second day as attempts were made to clear the road. “Members of an organized criminal group”, backed by international terrorist groups, were acting with the objective of destabilising the social and political situation in GBAO, the ministry added. It did not name the terrorist groups it had in mind or provide evidence of their presence and actions, but said they provided protesters with weapons and sent representatives to commit “terrorist acts”.

"The organised criminal groups did not comply with the lawful demands of law enforcement officers to hand over their weapons and ammunition, and instead engaged in armed resistance," the interior ministry continued in a statement.

The day before the operation, the ministry said one protester was killed and three law enforcement officers wounded as security forces deployed rubber bullets and tear gas against the protesters.

Tensions between the government and the Pamiri residents of the nominally autonomous eastern region have been simmering since the five-year civil war that took place in Tajikistan shortly after the Soviet Union's demise in 1991, leaving tens of thousands dead and more than one million people displaced.

Gorno-Badakhshan, a linguistically and ethnically distinct region in the Pamir Mountains, known as the “Roof of the World”, that makes up 45% of Tajikistan’s land area but is home to only around 230,000 people, or 3% of the country’s population, was the base for rebels who opposed government forces during the 1990s conflict. The GBAO economy is wracked by unemployment, difficult living conditions and, increasingly, high food prices. The majority of the region’s population follow Ismailism, a branch of Shi'ite Islam, while most Tajiks are Sunni Muslims.

The region has seen many violent protests and clashes with security forces since the civil war ended in 1997. The deadliest fighting since the war occurred in July 2012 after the fatal stabbing of the regional head of the State Committee on National Security. Estimates of how many were killed range between around 40 and more than 200.

The stabbing was blamed by the government on local strongman Tolib Ayombekov. A military operation against an armed group officials said was led by Ayombekov saw the deployment of hundreds of troops. And it seems they have never left.

Dushanbe has so far pinned the blame for the latest unrest on another influential local leader, Mahmadboqir Mahmadboqirov and his associates, RFE/RL’s Tajik Service reported. In February, Mahmadboqirov, 58, was formally charged with insulting and using force against a government representative, as well as inciting ethnic hatred. He denies the accusation.

Not for many years have there been any public calls for independence by any group or prominent figures in GBAO. A Tajik expert on political affairs told RFE/RL that the reason behind the ongoing tensions in the region had more to do with the government’s “wrong policies” than any striving for independence or greater autonomy.

“So far, the official demands of the protesters are limited to the problems of police lawlessness. The protest movement was more of a social nature, while all its leaders traditionally distance themselves from the political opposition,” the expert, who spoke on condition of anonymity, told RFE/RL.

He warned, however, that “if the government continues to rely on heavy-handed methods, the movement will radicalize in the future.” The analyst added that the government should also address the grievances of people that complain that “all the revenues from the province’s natural resources are controlled by the government, while the region only gets minimum subsidies in return.”

In a joint statement, the European Union delegation in Tajikistan and the embassies of the UK, France, Germany and the US expressed their “deep concern about reported internal tensions and violent clashes” in GBAO.

They called on “all parties to spare no effort to de-escalate, exercise restraint and refrain from excessive use of force and incitement to violence”.

A maze of smuggler tunnels: the Kyrgyzstan-Uzbekistan border