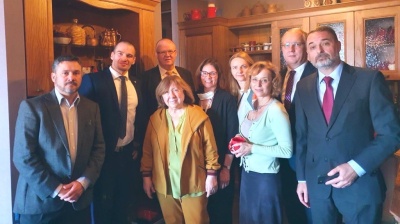 Belarusian Nobel literature laureate and member of the Coordinating Council Svetlana Alexievich left the country for a month’s medical treatment in Germany. When threatened with arrest a number of EU ambassadors camped out at her apartment to protect her.
By bne IntelliNews September 29, 2020

Belarusian Nobel literature laureate and member of the Coordinating Council Svetlana Alexievich has left the country for a month’s medical treatment in Germany, AFP reported on September 28.

Alexievich is the only member of the newly established Coordinating Council who has not been arrested or forced into exile by the Lukashenko regime, although she was called in by authorities for questioning in August but refused to answer any.

Belarus' self-appointed President Alexander Lukashenko has refused to acknowledge the Coordinating Council and the authorities have opened some 50 criminal cases against the body, accusing it of organising a coup d'état.

Alexievich has been only member of the CC still at liberty in the country but was recently joined by Siarhei Dyleuski, who leads the striking workers at the Minsk Tractor Works (MTZ) and was released from prison last week after serving 15 days in jail.

Two other members of the presidium of the Coordinating Council remain in jail, opposition leader and one of the trio of women that campaigned against Lukashenko Maria Kolesnikova, and lawyer Maxim Znak, who just ended a 10-day hunger strike to protest against what he claims was his illegal detention. The presidential candidate Svetlana Tikhanovskaya is in exile in Lithuania and former diplomat and Belarusian minister Paval Latushka has also left the country.

With Alexievich's departure the Coordinating Council only has Dyleuski left but the weekly mass demonstrations are leaderless and largely co-ordinated by the Nexta Telegram channel. The Coordinating Council has supported the demonstrations, but it is not responsible for organising them. Its job is largely political. Tikhanovskaya has been lobbying the EU and neighbouring countries for support and sanctions and had a meeting French President Emmanuel Macron on September 29 as part of that campaign.

Tikhanovskaya was in Brussels on September 21, where she was promised a “serious economic aid package” from the EU should the opposition prevail in its showdown with Lukashenko, although she gave no details. She has also refined her message and this week made it clear that the EU should limit its actions on Belarus.

“I do not propose to impose general, sectorial economic sanctions. I worry that private companies and innocent people may suffer. Therefore, I am in favour of targeted individual sanctions against specific individuals and companies that support or finance the Lukashenko regime,” she said in a message posted on social media on September 28.

Alexievich's trip to Berlin has been planned for a while, according to her friend Mariya Voiteshonok, reports AFP, and she is expected to remain in Germany for a month.

"She will return to Belarus in a month. She is not dropping her activities as a Coordination Council member," Voiteshonok said, adding Alexievich also planned to visit Italy, where she has been awarded a literary prize.

Known for her Russian-language books with witness accounts of the Soviet era, including World War II and the Chernobyl disaster, Alexievich has always publicly opposed Lukashenko. She won the Nobel Literature Prize in 2015, but none of her books were available in Belarus at the time.

She has played a symbolic role as an opposition figure, throwing her prestige behind the opposition, but has played no active role in the Coordination Council and does not attend its meetings.

Earlier this month, she complained of intimidation after unidentified men gathered outside her block of flats and rang her door bell. Diplomats from several European countries joined her in her flat as a gesture of support.

Her assistant, Tatiana Tyurina, told Belarusian independent news site Tut.by that the writer's departure was not linked to the criminal case.

Asked if Alexievich was emigrating, Tyurina said: "No, of course not. She went off to deal with her personal and literary business."