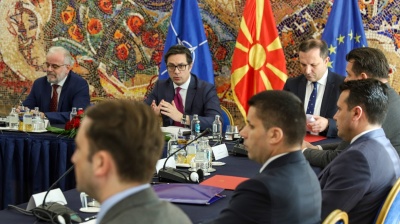 General elections scheduled for April in North Macedonia and Serbia are being postponed as the number of coronavirus (COVID-19) cases continues to increase in both countries.

Their respective governments have already taken steps to prevent the spread of the virus, including by closing their international borders. Holding elections would inevitably have resulted in an increase in human contact, raising the risk of passing on the highly infectious coronavirus.

As of March 17, the number of infected people in Serbia stood at 65, including 34 in hospital. In North Macedonia five new cases have been registered, bringing the total number to 31. Four of those infected are health workers from the western town of Debar.

Political parties in North Macedonia agreed unanimously on March 17 to postpone the snap general election due on April 12 due to the coronavirus epidemic.

A meeting of the parties’ leaders to discuss delaying the election was held at the office of President Stevo Pendarovski.

“At the leadership meeting we shared the opinion that there are no conditions for holding elections and as responsible politicians we put all our capacities to protect the health of the citizens and the fight against coronavirus,” ex-PM and leader of the ruling SDSM Zoran Zaev said.

Leader of opposition VMRO-DPMNE Hristijan Mickoski agreed that there is no condition for holding the snap election.

Early elections were called Zaev announced he was stepping down as prime minister after failing to secure a date for North Macedonia to start EU accession talks. The vote was expected to have been a closely fought race between the two parties.

Legal experts will now have to find a way for the elections to be postponed and a new date set, as the parliament was dissolved on February 16.

Zaev also urged Pendarovski to declare a state of emergency over the situation with COVID-19.

A day earlier, Pendarovski said there was no need for the country to declare a state of emergency as the authorities have already taken all necessary measures to halt the spread of the virus.

On March 16 the government decided to close all land border crossings. Skopje airport will be also closed starting from March 18 except for state, military, humanitarian, hospital, cargo and non-passenger flights.

Serbia also suspended all preparations for its general election that was scheduled for April 26 due to the coronavirus outbreak, the election body said.

“With this decision the election process is temporary stopped until the so-called coronavirus spread continues and will be resumed upon adoption of a decision to cease the state of emergency,” the Republic Election Committee said in a statement.

The election was widely expected to have resulted in a victory for President Aleksander Vucic's ruling Serbian Progressive Party (SNS). The country's main opposition parties planned to boycott the vote.

The latest measure, approved on March 17, was the introduction of a curfew starting from March 18. All residents are banned from going out between 8 pm and 5 am, while people aged 65 and older in urban areas and aged 70 or older in rural areas are not allowed to go out at all.

“We are introducing this to prevent the spreading of the virus,” Vucic told a press conference.