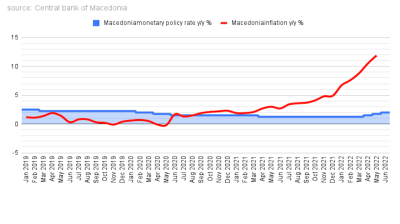 North Macedonia’s central bank has raised its key rate for the third month in row due to the steadily rising inflation. The rate was increased by 0.25 of a percentage point (pp), as in the previous two months, to 2%, it said on June 15.

Before the latest series of increases, the key rate, which is also the rate for central bank (CB) bills, was unchanged at 1.25% since March 10, 2021.

“Based on the latest indicators, it was decided the process of gradual normalisation of the monetary policy to continue in order to maintain the medium-term price stability,” the central bank said in the statement.

In terms of price hikes, in the first five months the inflation averaged 9.1%, which is moderately higher compared to central bank’s projections.

“The Food and Agriculture Organization (FAO) index in the last two months shows downward corrections in world food prices, but still the military developments in Ukraine, as well as the situation in the supply chains, bring uncertainty about the further movement of inflation,” the central bank said.

The next auction of CB bills is due to be held in mid-July.

Poland’s CPI growth rate picks up just 0.1pp to 15.6% y/y in July
Perspectives | Beijing and Moscow clash over Kazakhstan’s oil
Russia’s international reserves up $3.6bn in one week to $571bn

Poland’s CPI growth rate picks up just 0.1pp to 15.6% y/y in July
23 hours ago
Romanian stock exchange reaches new record as BET-TR rises 5.7% ytd
1 day ago
Population decline to take Emerging Europe back to the early 20th century
1 day ago
Russia’s international reserves up $3.6bn in one week to $571bn
1 day ago
CPI inflation in Moldova hits 33.6% y/y in July
2 days ago