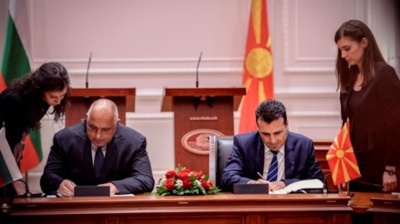 The Friendship Treaty was signed on August 1, 2017 by the then prime ministers of North Macedonia and Bulgaria, Zoran Zaev and Boyko Borissov.
By Valentina Dimitrievska in Skopje September 6, 2022

North Macedonia’s biggest opposition party VMRO-DPMNE is seeking a referendum against the Friendship Treaty with Bulgaria signed in 2017, claiming it is harmful for the country's national interests.

North Macedonia has been forced to make a number of concessions to persuade Bulgaria to lift its two-year veto on the start of the EU accession talks with Skopje in July this year.

The first intergovernmental conference was held on July 19, but for the second conference to be held, which effectively will mean a start of negotiations, North Macedonia has to change its constitution and include ethnic Bulgarians as a constitutional nation. Under the protocol signed between Skopje and Sofia after the veto was lifted, Bulgaria has the right to block North Macedonia’s progress on its EU path if it is not satisfied with the implementation of its demands.

VMRO-DPMNE's executive committee decided on September 5 to collect signatures for calling a referendum against the treaty, the party's leader Hristijan Mickoski said in a Facebook post.

He added that in the coming week, the party will collect at least 100 signatures, with are needed for the initiative to be submitted to the parliament.

The parliament should then endorse the initiative and then the procedure will start for collecting at least 150,000 signatures for the referendum to be held.

Mickoski suggested that the referendum question will be as follows: “Are you in favour of abandoning the validity of the Law on the Ratification of the Agreement on Friendship, Good Neighbourliness and Cooperation between the Republic of Macedonia and the Republic of Bulgaria?”

Mickoski said that unless the Friendship Treaty with Bulgaria is not abandoned, VMRO-DPMNE will not support constitutional changes.

Mickoski explained that the party is not against the Bulgarians being part of the constitution, but argued that the agreement is assimilatory and should be abandoned.

Mickoski believes that the treaty is a basis for Bulgaria to impose unacceptable demands on North Macedonia such as that Macedonian language is a Bulgarian dialect as well as Bulgarian views on history which are different to the Macedonian ones.

For the referendum to be successful it should be accepted by 910,000 citizens, or half of the total population.

Mickoski urged other ethnicities in the country to support the referendum idea.

"This initiative is completely European because it opposes the Bulgarian policies of denying Macedonian language, culture and identity," Nikola Micevski, a coordinator of the VMRO-DPMNE parliamentary group, said.

The ruling Social Democratic Union of Macedonia (SDSM) rejected the calls for a referendum saying that it will undermine the country's EU perspective and that it is another attempt by Mickoski to destabilise the country.

The Friendship Treaty was signed on August 1, 2017 by the former prime ministers of North Macedonia and Bulgaria, Zoran Zaev and Boyko Borissov, respectively. Later, Borissov's government imposed a veto on Skopje's EU accession talks in 2020 over language and history issues.

The treaty, which sparked controversies in the two countries, was intended to put an end to all disputes arising from history, language and minority issues, which resulted in a troubled and complex relationship between Skopje and Sofia. However, the Bulgarian side has since used it to make demands on Skopje.

Even if the prospective referendum is successful it is unclear how it will reflect on the current position of North Macedonia in the EU negotiation process as the implementation of the Friendship Treaty is already a part of the EU negotiation framework for Skopje.