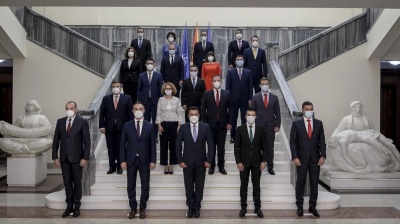 The government was formed following the July 15 snap elections, in which the Social Democratic Union of Macedonia (SDSM) in coalition with ethnic Albanian party Besa won two more seats than the opposition VMRO-DPMNE (46 versus 44).

62 MPs voted for the government and 51 were against. There were no abstentions.

The main partners in the new coalition government are the SDSM and the Democratic Union for Integration (DUI), which won 15 seats in the 120-seat Assembly. The government also includes the Democratic Party of Albanians (DPA) with one MP. The new cabinet is composed of 19 ministers, seven fewer than the previous government.

“A stable political period is ahead of us, a decisive and uncompromising fight against the grey economy, crime and corruption, as well as an efficient and transparent legal system,” Zaev said in his address to the MPs.

The main commitments of the new cabinet also include the vetting of the justice system, economic development, higher salaries and creating new jobs.

During the debate, MPs from the main opposition VMRO-DPMNE party fiercely criticised the new government, accusing it of crime and corruption and saying that it is incapable of dealing with the coronavirus (COVID-19) epidemic and meeting its promises.

“In the last two days we have been witnessing extremist rhetoric that is disappointing as it indicates how the attitude of the opposition will be towards the new legislature,” SDSM MP Kostadin Kostadinov said.

Zaev, who also led the previous government from 2017 to 2020, resigned in early January disappointed with the EU’s failure to give the country the green light for accession talks in October 2019, but the EU went on to make a positive decision in March, after the adoption of the new negotiation methodology. Since January, North Macedonia had been led by an interim government under Oliver Spasovski, which included a minister and deputy ministers from VMRO-DPMNE.

The previous government led by Zaev took several difficult decisions, such as concluding the name deal with Greece, which changed the country name to North Macedonia, and Friendship Treaty with Bulgaria. During this time, the country became a Nato member (in March 2020) and is waiting to launch EU accession talks by the end of this year.

VMRO-DPMNE said earlier that the party will start mass demonstrations in the autumn to express its dissatisfaction with the new government coalition.