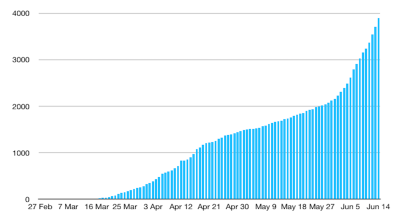 North Macedonia’s President Stevo Pendarovski decided on June 12 to end the state of emergency which expired at midnight on June 13 despite the rising number of new coronavirus (COVID-19) cases.

With the end of the state of emergency, the election activities are resuming, which means that the elections should be held on July 5, and the election campaign begin on June 16.

Meanwhile the leader of the main opposition party VMRO-DPMNE, Hristijan Mickoski, said on June 14 that July 5 or July 8, proposed by the ruling Social Democrats' leader Zoran Zaev, are not acceptable dates and that elections should be held in mid-July at the earliest. Mickoski also asked the president to extend the state of emergency.

While announcing the decision, Pendarovski underlined he made the decision to end the state of emergency in order to open the way for snap elections for the country to get functional institutions, after the parliament was dissolved in February and the state is led by interim government since the beginning of this year.

The president explained that he declared the state of emergency on March 18 and the subsequent extensions not on the basis of the number of infected, but in order to allow the interim government, in the absence of a parliament (which was dissolved ahead of the original election date) to take decisions relevant for the health situation and to help households and businesses to cope with the consequences of the epidemic.

Regarding the snap elections that should be held 22 days after the end of the state of emergency, Pendarovski said that the vote is needed for the country to get a functional parliament and a legitimate government.

North Macedonia was to held snap elections on April 12, but they were delayed due to the pandemic.

In the evening of June 12, Pendarovski met Zaev and Mickoski, but they failed to reach consensus on the election date.

VMRO-DPMNE claims that holding elections is not possible due to the alarming rise in coronavirus cases, which since June 1 escalated with more or less 150 new cases each day and a record high 196 on June 13.

The ruling SDSM argues the opposition is trying to keep the state hostage without fully functional institutions.

Other observers say the arguments of VMRO-DPMNE for delaying snap elections are unreasonable while its interior minister and deputy ministers participate in the interim government and sabotage the work of the cabinet to provoke discontent among the population.

VMRO-DPMNE had not yet made it clear if the party would boycott elections if held on July 5.

On the last day of the state of emergency, the government decided to open the borders for transit of foreigners who will be able to stay in the country for up to five hours. As of June 14, the government will open the main border crossings including the Bogorodica crossing point with Greece.

The government has adopted a protocol for transit of tourists at the crossing points of Skopje airport as well as the Tabanovce, Deve Bair, Bogorodica, Kafasan and Blace border crossings. However, it did not specify when the airport will open.

COMMENT: Why the Balkan region should be on investors’ radar screens
COMMENT: Interest rates during the pandemic. Going negative?
North Macedonia’s ruling SDSM and DUI close to agreement on new government

Ladies' Night as Belarus protests go into day four
13 hours ago
500 Belarus IT CEOs threaten to move their business out of the country unless violence ends, new elections are held
14 hours ago
Iran hails claimed coronavirus vaccine breakthrough
1 day ago
EBRD seriously concerned by indictment against Moldova’s Victoriabank
23 hours ago
Opposition leader Svetlana Tikhanovskaya forced to leave Belarus as protests go into their third day
1 day ago