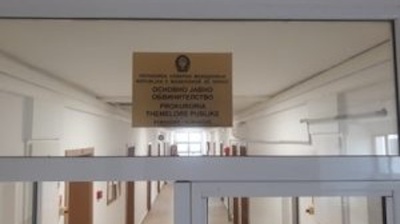 By Valentina Dimitrievska in Skopje February 8, 2021

The country’s central bank revoked the license of Eurostandard Bank in August 2020 due to the bank's failure to meet minimum legal requirements for operation, and filed bankruptcy procedures.

According to media reports, the bank’s owner and former Skopje mayor, Trifun Kostovski, and his son Kosta Kostovski are among the people that will be investigated.

The four are suspected of money laundering and causing the bankruptcy of the bank by illegal actions during 2018 and 2019, the JORM said in a statement.

“As a result of the improper operation of the suspects, the bank failed to perform the basic functions and did not act in accordance with the measures imposed by the central bank governor, thus contributing to additional deterioration of the bank's risk profile,” it said.

In 2019 the central bank discovered that Eurostandard lacked capital and asked the bank to recapitalise. The recapitalisation was partially fulfilled in 2019, but the commitments undertaken for the first half of 2020 were not fulfilled, it said.

The non-fulfilment of the recapitalisation obligations and the high credit risk reduced the capital adequacy ratio below 2%, making the bank insolvent. Therefore the central bank said it would file a proposal to the competent court to open bankruptcy procedures against the bank.

When the bankruptcy procedure was launched, the bank's non-performing loans to 149 legal entities totalled MKD3.38bn (€55mn) thus causing damage to most of its individual savers while preferential credit takers benefited from non-repayment of the loans and the impossibility to enforce the repayment of their debts.

The bank depositors who lost their money staged a protest in front of the parliament last November when MPs discussed the reasons for the bank’s collapse with central bank governor Anita Angeloska Bezoska and majority owner Trifun Kostovski.

The opposition VMRO-DPMNE MP Antonio Milososki claimed that 29 local firms close to PM Zoran Zaev’s family, including Sara Engineering owned by the prime minister’s brother Vice Zaev, were among firms that did not repay loans taken by Eurostandard.

Recently, Trifun Kostovski claimed that his family lost about €70mn due to the forced bankruptcy of the bank saying that the case was a cover-up for a political-business crime.

The central bank explained last year that Eurostandard Bank was subject to repeated supervisions since 2019 due to the greater exposure to credit risks. Despite the fact that the National Bank has repeatedly imposed measures requiring Eurostandard Bank to eliminate weaknesses, to reduce risk exposure and improve risk management process, the bank failed to do so.

As the bank’s assets account for only 1.3% of the banking system’s total assets, the revocation of the license for the establishment and operation of Eurostandard Bank will not affect the stability of the banking system, which remains stable and well capitalised, the central bank said at the time

In the morning of April 22 it looked like Russia was revving up to start WWIII by invading Ukraine. By the end of the day Russian President Vladimir Putin was holding out the hand of co-operation in a global effort to beat the Climate Crisis.

Putin holds out a hand of co-operation at the online climate summit with Biden
16 minutes ago
#BREAKING: Russia withdraws troops from Ukraine’s border
16 hours ago
Navalny rally disappoints on a low turnout
1 day ago
Czechs give ultimatum to Russia to let expelled diplomats return to Moscow
1 day ago
Outrage in Armenia as Azerbaijan’s Aliyev threatens force to secure land corridor
1 day ago