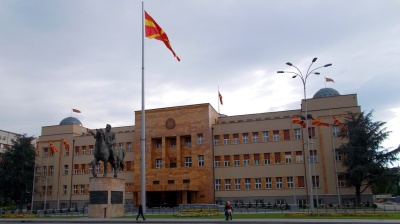 68 MPs backed the proposal in North Macedonia's parliament, but the opposition walked out before the vote took place.
By Valentina Dimitrievska in Skopje July 16, 2022

North Macedonia will hold its first intergovernmental conference (IGC) with the EU on July 19, three days after the parliament, in the absence of the opposition, gave the green light to the French proposal for lifting the Bulgarian veto on North Macedonia’s EU accession progress.

The country has been waiting for 17 years to start EU accession talks, but has been repeatedly thwarted by two of its neighbours — first Greece and lately Bulgaria — which used their positions as EU members to demand concessions from Skopje.

Despite the breakthrough, the opening of EU accession chapters is expected only after the second IGC, which will be held after North Macedonia adds ethnic Bulgarians to the constitution, one of Bulgaria’s conditions for lifting its veto. This is an unprecedented addition to EU enlargement policy.

The vote will also enable Albania, which was coupled with North Macedonia in the process, to start EU accession talks, but without conditions.

68 MPs voted for the conclusions related to the modified French proposal, with no votes against as the opposition led by VMRO-DPMNE left the plenary session before the vote. The vote was supported by all ethnic Albanian parties.

After the parliament gave the green light, the government instantly approved the proposal.

“With this government session, we are making another historic step for our country," said Prime Minister Dimitar Kovacevski.

The vote was held amid protests and tensions in the country as Macedonian opposition parties rejected the French proposal as harmful to the country’s national interests. They argue that it satisfies only the demands of Bulgaria.

The leader of VMRO-DPMNE, Hristijan Mickoski, held a news conference immediately after the vote, pledging that his party would never vote for constitutional changes putting ethnic Bulgarians into the constitution.

Mickoski warned that after the end of the mandate of the MPs from the ruling Social Democratic Union of Macedonia (SDSM), they will be criminally liable for betraying the country’s national interests.

North Macedonia changed its name in 2019 under the Prespa deal to solve the name dispute with Greece which allowed the country to become a Nato member in 2020, but failed to start EU accession talks at the time due to the Bulgarian veto imposed over history and language issues.

EU officials hailed the vote in the parliament in Skopje. EU Enlargement Commissioner Oliver Varhelyi tweeted: “I welcome the result of today’s vote after last days of deliberate discussions in parliament giving [a] clear mandate for [the] government to start [the] 1st IGC based on the French proposal. We look forward to open accession negotiations with North Macedonia.”

President of the European Council Charles Michel said in a tweet that the vote in the assembly paves the way to hold the intergovernmental conference with North Macedonia next week.

“A crucial step for North Macedonia and for the EU. Our future is together and we welcome you with open arms,” Michel said.

“Congratulations to North Macedonia on the vote that now paves the way for opening the accession negotiations rapidly. It was a historic opportunity. And you seized it!” President of the European Commission Ursula von der Leyen said in a tweet.

Von der Leyen addressed North Macedonia’s MPs on July 14 urging them to vote on the proposal and seize the opportunity after being an EU candidate country for 17 years.

She assured MPs that the proposal protects the country’s interests and addresses the concerns of all sides.

However, just like the opposition within North Macedonia, some MEPs are not convinced.

“I am so ashamed about the EU's continuous betrayal of North Macedonia. The words of von der Leyen cannot be sweet enough to sugarcoat this,” German MEP from the Green party, Reinhard Butikofer, tweeted on July 15.