Novichok found in a water bottle in Navalny’s hotel room 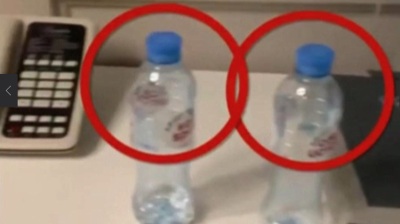 Colleagues of anti-corruption blogger and opposition activist Alexei Navalny found a bottle of water containing traces of the nerve agent Novichok used to poison him in his hotel room in Tomsk, they said in a video posted on September 17.

Navalny fell critical ill a few hours later during a flight from Tomsk to Moscow on August 20 and his plane was forced to make an emergency landing in Omsk, before he was later flown to a hospital in Berlin.

Following reports of Navalny's suspected poisoning, members of his organisation in Tomsk went to his hotel room in Tomsk where he had spent the night and collected everything, including several bottles of water, which were then sent to Germany for testing.

The team announced that traces of Novichok had been found in one of the bottles of water. Initial reports said that Navalny had been poisoned at the airport with a cup of tea.

Laboratories in Germany, France and Sweden have established he was poisoned by a Novichok nerve agent, a poison developed by the Soviet military, though Russia denies this and says it has seen no evidence.

A video posted on Navalny’s Instagram account showed members of his team searching the room he had just left in the Xander Hotel in Tomsk on August 20, an hour after they learned he had fallen sick in suspicious circumstances.

“It was decided to gather up everything that could even hypothetically be useful and hand it to the doctors in Germany. The fact that the case would not be investigated in Russia was quite obvious,” the post said.

The video of the abandoned hotel room shows two water bottles on a desk, and another on a bedside table. Navalny’s team, wearing protective gloves, are seen placing items into blue plastic bags.

The Kremlin has denied it has any Novichok and that all stocks of the nerve agent that was develpped in the '70s and '80s were destroyed in Russia in accordance with the protocols and regulations of the Organization for the Prohibition of Chemical Weapons (OPCW), the head of the Foreign Intelligence Service (SVR) Sergei Naryshkin told reporters on the same day.

“And this [destruction] was recorded in due course. Therefore, to say that there are either production facilities or old stocks of chemical warfare agents on the territory of Russia is, of course, misinformation,” Naryshkin said.

In addition, he added that doctors in Omsk had conducted research on all protocols and on modern equipment.

German doctors announced “unequivocal evidence” that Novichok had been used on August 24 and laboratories in France and Sweden confirmed the finding a few days later.

The Navalny saga has turned into a major diplomatic scandal that is likely to be very damaging to Russo-European relations. The Kremlin has responded to the accusations, not by launching a domestic investigation, but by trying to muddy the waters and hurling accusations at Europe, including suggesting that the doctors on the ambulance plane that flew Navalny to Berlin had poisoned him with Novichok.

This week Russia presented the EU with nine “inconsistencies” regarding the “incident, which occurred with a Russian political activist and blogger Alexey Navalny.”

Acknowledging that its staff members are not toxicology experts, Russia’s EU Permanent Mission says Navalny’s sudden illness precipitated “a rapidly growing information campaign in the EU, both in official circles and the media,” reports Meduza.

One of main arguments is that “Navalny Two-Percent” is too unimportant in Russian politics to warrant murdering, as he polled only 2% in a poll last year ranking politicians in the country.

“What would be the reason for the Russian authorities to poison Alexey Navalny, taking into account that his actual popularity level hardly reaches 2%, according to the recent survey conducted in July 2020 by the Levada Center, an independent, non-governmental polling and sociological research organisation?” Moscow’s EU Permanent Mission said in the letter.

Moscow is also accusing the German government of refusing to provide Moscow with the results of Navalny’s toxicological analysis, saying this suggests foul play.