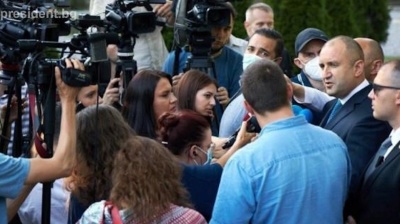 An “omelette” for the Bulgarian government marked the start of the 22nd evening of protests in the capital Sofia when dozens of people threw raw eggs and tomatoes towards the government building. Young protesters also hung up Prime Minister Boyko Borissov’s “dirty laundry” – 14 publications in local media quoting key statements by Borissov from the last few years.

While the goal of the “omelette” was not specifically explained, the people hanging up the “dirty laundry” explained they wanted to show how Borissov has transformed politics through his interviews, statements and articles on various events.

The “dirty laundry” list is headlines from articles or interviews.

“Borissov: Go out on the streets so that the government falls” says one headline, reporting Borissov’s appeal in 2013 when he was in opposition and there were mass protests against the government.

“Borissov: Peevski has gone. Peevski has left the country” says another, a reference to businessmen and politician Delyan Peevski of the Movement of Rights and Freedoms (DPS). The prime minister is accused of being politically dependent on the DPS and its chairman of honour Ahmed Dogan.

Three weeks in, the daily protests show no signs of abating. Protesters blocked one of the key streets in Sofia a day earlier, setting up a tent camp that protesters say will stay there until they achieve their goals – the resignations of government, chief prosecutor Ivan Geshev and of the head of public broadcaster BNT Emil Koshlukov.

They have all been accused of corruption and involvement in murky agreements with controversial businessmen and members of the ethnic-Turk DPS, particularly Dogan and Peevski.

Dogan and his party became symbols of corruption in Bulgaria after Dogan openly admitted being behind all major political appointments in the country.

Although the ruling coalition claims the protests seem to be losing momentum, local media and participants say the opposite. Protests have also persisted for days in several other Bulgarian towns.

Meanwhile, the constitutional court slammed Geshev’s attempts to launch a probe against President Rumen Radev – one of the fiercest critics of his work and of the government.

The move was seen as another attempt to put pressure on Radev and silence him. At the time, Radev announced he would initiate constitutional changes that would limit the currently unlimited authority of the chief prosecutor.

The constitutional court ruled that the president and the vice-president have immunity and cannot be probed, nor can any actions concerning their personal rights and freedoms be taken during their mandate.

The ruling was seen as another proof of Geshev’s incompetence as the constitution was clear regarding the president’s immunity, and this was used as yet another reason for demanding his resignation.

After the constitutional court released its ruling, Radev declined to comment and said the court’s ruling should not be commented on but applied.

However, he commented on a taped conversation of a man with Borissov’s voice with a person called Tomislav – believed to be Deputy Prime Minister Tomislav Donchev — released anonymously a day earlier, in vulgar and offensive words were used against Radev and against people protesting against a planned hike in the retail price of fuel back in 2018.

Although the recording does not contain information on possible corruption or abuse of power like previous leaked tapes, it confirms many Bulgarians’ view of Borissov as uncultured.

Radev commented that the audio file confirms that Borissov is behind the negative campaign against the presidency.

“This conversation has clearly showed who has ordered the whole defamation campaign against the presidential institution. It is unfortunate that in the panicked attempts of saving himself, the prime minister has dragged his entire party and all his party members to the bottom,” Radev said as quoted by Dnevnik news outlet.

He added he was proud of his profession and respects all professions, including firefighters who are risking their lives. Borissov is a former firefighter.

Even former leader of the Soviet Union Mikhail Gorbachev has thrown his support behind the Belarusian population protesting against self-appointed President Alexander Lukashenko.

Tanker tracking companies, meanwhile, see September surge in Iranian crude shipments with one describing “levels we haven’t seen in a year and a half”.

“Putin’s chef” follows through on threat to bankrupt Navalny, bailiffs seize his apartment

Russian bailiffs have seized the Moscow apartment of Alexei Navalny as the close personal ally of Russian President Vladimir Putin, Yevgeny Prigozhin, follows through on threats to ruin the opposition activist.

Romania at high risk of downgrade to junk

Fitch and Moody’s scheduled reviews of Romania’s creditworthiness this autumn, shortly after MPs backed 40% pension hike that could push budget deficit up to 11% of GDP.

TURKEY INSIGHT: Follow the (hot) money
1 day ago
Lukashenko isolated himself from the rest of the world with a secret inauguration
1 day ago
Iran’s oil minister openly admits forging export documents to dodge US sanctions
1 day ago
“Putin’s chef” follows through on threat to bankrupt Navalny, bailiffs seize his apartment
1 day ago
Romania at high risk of downgrade to junk
1 day ago