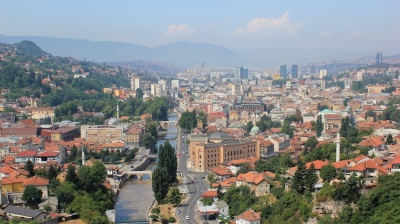 The main message of the October elections was a decisive rebuke for hardliners.
By Gary Kleiman of Kleiman Intl Consultants Inc November 22, 2022

Bosnia’s October elections were mired in months of procedural controversy, as the US/EU high representative took the rare step of directly dictating changes to the way the Croatian representative in the country’s tripartite presidency is elected, complicated by the large Bosniak population in the Federation. To populist candidates the move fits the stereotype of unrelenting international community interference in local ethnic politics, and the decision drew criticism in Germany too, the appointee’s home country, as he was hauled before Parliament for an explanation.

In the end, though, the imbroglio was a sideshow to the poll’s main message, a decisive rebuke for hardliners regardless of procedural shifts and perceived outside meddling. The Izbetovic family dynasty lost its first run since the war in the Bosnian Federation, and Serb perennial troublemaker and secession proponent Milorad Dodik only eked out a return to the Republika Srpska presidency after an initial tally showed defeat amid fraud accusations.

Against the background of another European war, anaemic 2% GDP growth, and faster-track EU candidacy for Bosnia’s neighbours, voters expressed infighting fatigue and a desire to resurrect practical economic cooperation to raise basic living standards and counteract mass emigration. Bosnia’s stand-alone stock component on MSCI’s frontier index was a positive signal with a flat performance in October, as the composite was down 30% throughout the first ten months. Banja Luka’s tiny market with its heavyweight telecoms listing reflected initial trepidation as its monthly trading volume halved to $20mn, but post-election is poised for the selloffs of stakes in 60 state companies that can excite investors and burnish the competitive landscape. Its gauge finished the month up 2% from September, and 25% the past year.

Dodik, after securing his victory, repeated his breakaway chant, but allies Serbia and Russia are too embroiled in their own downturns and energy trade shifts to actively encourage steps with financial support. Brussels, to its credit, recognised an overdue opening with a nod in principle to Bosnia’s single market membership, while promoting West Balkans integration on labour movement and professional credentials. With the US and other stakeholders preserving the 25-year peace, the agenda can further develop so that business and banking relationships solidify within the Federation and deepen throughout the Eurozone, Turkey and Central Asia with long-standing ties. Both governments and private sector associations should seize the election aftermath to craft a joint economic stabilisation and takeoff dynamic that once and for all dents nationalist momentum.

Serbia President Aleksandar Vucic handily won separate re-election, but financial markets have an opposite verdict with its frontier stock index off 15%, and total government bond/FX return -25% a year after it entered JP Morgan’s benchmark. His second-term cabinet notably dismissed the pro-West mining minister, as the government has tried to straddle sanctions and other policies with traditional Russia-aligned political and diplomatic interests. During the campaign he was quick to spurn the adoption of EU restrictions and particularly a flight ban, as business executives and tourists regularly shuttled between the two countries’ capitals before the war brought another influx. Moscow’s hydrocarbon connection, traditionally the almost single source for Serbia, remains vital and could cost $3bn by end-year, with alternatives scant. Delivery through Croatia will end in December as a backstop, and earlier attempts to forge an indirect energy arrangement with China through lithium mining access at home were suspended after mass environmental activist protests scuttled exploration.

President Vladimir Putin remains the main UN Security Council partner in denying Kosovo’s independence, even as Serbia has steered clear of recognising East Ukraine annexation in spurious referenda. The US has intervened between the sides to attempt a compromise in return for economic aid, but the so-called licence plate battle is again a sticking point against calm relations. Pristina launched drones, and Belgrade mobilised the army on the border over the issue of car number plates as diplomatic identification due to go into effect early next year.

Serbia’s GDP increased just 1% in the third quarter, as retail sales have fallen six months in a row. The currency is down 12% against the dollar largely in line with the euro to boost foreign direct investment (FDI), but the balance of payments mainstay is remittances as young university graduates routinely turn abroad with double-digit unemployment. The current account deficit is a whopping 9% of GDP this year, and the central bank has been reluctant to hike interest rates to combat 10% range inflation. In the past the country turned to the International Monetary Fund (IMF) for traditional credit as well as no-borrowing staff monitored programmes. In his first term Vucic rejected that resort in favour of a $1bn bilateral loan from the UAE, but recently announced a $2.5bn precautionary agreement with Fund staff that the IMF board will consider in December.

For Bosnia in turn, the IMF’s June Article IV consultation report was harsh in lamenting the lack of state enterprise cleanup as a contingent liability despite a headline 35% debt as a share of GDP. It also criticised the regulator’s erratic handling of a bank run after Russian Sberbank’s sudden closure under EU sanctions with the currency board intact. Privatisation and financial stability are consensus steps among Bosnia’s entities that can be embraced in the more moderate election aftermath, with participation from their banking and business communities and advice from outside experts. A dedicated joint purpose can shift the future narrative from breakaway to breakthrough, as self-contained economic pragmatism becomes the prevailing formula.

PANNIER: Uzbeks, Kyrgyz cooperating to level unthinkable 10 years ago
4 days ago
PANNIER: A very Turkmen coup
8 days ago
OPINION: Bulgaria sets itself a tough task with Burgas-Alexandroupolis pipeline revival
12 days ago
NEMETHY: Is Ukraine War the beginning of World War III?
12 days ago
RIDDLE: The Russian army in 2023
12 days ago