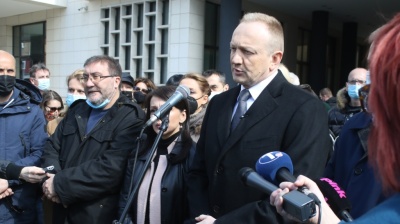 Djilas — who is under investigation over alleged links to an offshore company in Mauritius — accused Vucic, Mali and the three others of being “involved in forging documents about my alleged companies and accounts on Mauritius, in Hong Kong and who know which other destinations”.

The conflict between Djilas and Vucic has been going on for a long time, and is now intensifying due to the approaching parliamentary and presidential elections in April 2022.

Aside from Vucic and Mali, Djilas filed charges against Vladanka Malovic, the head of Vucic’s ruling Serbian Progressive Party’s (SNS’s) information department, Milorad Vucelic, the editor-in-chief of the Vecernje Novosti daily, and Andrijana Nesic, a journalist with the daily.

Speaking to reporters, Djilas said he had filed charges against the five for “preparing, distributing and later creating an affair based on those false documents”.

Vucic did not comment on the charges, saying it is up to the institutions to do their job.

The latest conflict between Djilas and Vucic began on March 18 when the Serbian finance ministry's Administration for the Prevention of Money Laundering said it started a probe into Djilas' alleged links to the company Ascanius LTD company in Mauritius. According to media reports, there is €6.4mn in the company’s accounts.

The opposition leader denied any link to the company, saying it was founded in 2011, and its owner was Fared Sodabar. Djilas also showed reporters a picture of Sodabar as the owner of the firm, adding the company had a turnover of €21,000 in 2019.

The National Bank of Serbia (NBS) then said on March 20 it will file misdemeanour charges against Djilas for what the central bank said was untrue information he gave to reporters earlier in the day related to a document from the NBS.

The bank denied Djilas’ statement that he legally founded a company in Switzerland in 2014 and that it had only one bank account, referring to the minutes the NBS made during the control of foreign exchange operations of the resident part of Multikom Group Belgrade (based in Serbia and Switzerland), owned by Djilas, who is also the company’s legal representative.

In an interview with Direktno.rs recently, Djilas said that he knew Vucic’s party would not forgive him his victories in the Belgrade mayoral elections — he served as mayor of the Serbian capital from 2008 to 2013 — and that he knew that Vucic was “behind every attack on anyone who thought differently”.

When asked by journalists what is currently the biggest problem in Serbia, Djilas answered very briefly: "Aleksandar Vucic".

The president of Serbia does not spare his opponent either. On March 22, Vucic talked of Djilas’ “arrogant attitude”, and said he was trying to distract from the topic of accounts in Mauritius, Hong Kong and Switzerland. Vucic also said that the “essential question is where so much money came from and whether taxes were paid on it".

The debate continued with Djilas saying that in the next few years, Serbia will owe more than €50bn, compared to the current debt of €27bn. That claim was then denied by Mali, who called it Djilas's “mirage” and an arbitrary calculation.

Djilas recently released a video in which he says he calculated how many millions of euros Vucic earned during the state of emergency due to the pandemic. In the video, Djilas raised questions about procurement during the pandemic, claiming €370mn was paid for goods that he calculated to be worth only €179mn.

The opposition politician also raised an incident in 2020, when a group of people, apparently supporter of the president, stood in front of Djilas' apartment, singing insulting songs calling him a thief. Djilas said, with visible emotion, that his children (then aged seven and nine) were crying and shaking with fear, hearing from the loudspeaker that their father was a thief.

There is no doubt that the pre-election activities in Serbia have started in the last few days as both sides step up their rhetorics.

Djilas is currently the main opposition leader, while lately Sasa Radulovic has been getting stronger. The SSP is a big party, but not as big as the Vucic's party.

In January, the SSP published the results of a public opinion poll commissioned by the Freedom and Justice Party that showed 35% people will vote for Vucic in the next elections, regardless of who is on the other side. 32.9% of voters are opposed to Vucic, while 31.4% of voters either do not know how they will vote or they will not go to the polls.

Vucic, whose party has won resounding victories in recent elections, dismissed the poll as gossip. His popularity has recently received a boost from the direct aid paid to Serbians during the pandemic, yet the effect of this may have faded by the time the election approaches next year.

Kyrgyzstan hits Canadian gold mine operator with $3.1bn fine and unveils law on state takeovers of companies
8 hours ago
ECHR deals big blow to Polish government-dominated top court
19 hours ago
Germany deal to buy Sputnik V dead, but India to receive 360mn doses
19 hours ago
Lukashenko signs decree on the transfer of power in the event of his death
19 hours ago
Amnesty International restores Navalny’s Prisoner of Conscience status
1 day ago