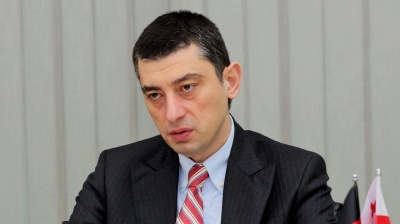 Surrounded by protesters bearing a yellow “Crime Scene” ribbon in Georgia’s parliament building, lawmakers endorsed outgoing interior minister Giorgi Gakharia as prime minister and his requested cabinet, with the move coming one week after the near silent resignation of predecessor Mamuka Bakhtadze.

Dozens of protesters gathered, holding placards reading: “We will not surrender.” Opposition lawmakers boycotted the vote, but the ruling Georgian Dream party passed the formation of the new government alone with 98 votes (there are 149 MPs in all). The low turnout at rallies held in front of parliament over the past week has come as a serious blow to the opposition, while being a huge success for Georgian Dream.

“I want to declare that I’m not going to go anywhere—I will finish you,” Gakharia told opposition lawmakers.

Gakharia, “Moscow's man” or “Ivanishvili's last stooge” as described by a piece run by Deutsche Welle, or “Russian-educated former interior minister” as he was dubbed on a more neutral note by Reuters, earned notoriety lately by orchestrating a violent crackdown against anti-government protesters, many of them youths, in June. Instead of dismissing him, head of the ruling party and billionaire oligarch Bidzina Ivanishvili, has appointed him to form a new, stronger government and secure another term in office for his Georgian Dream. It is losing voter support but faces a general election next year. And perhaps dismissing Gakharia would indeed have been interpreted as a sign of weakness—something Ivanishvili cannot afford one year before the poll.

'Failed coup d'état'
Less than two months before his nomination, Gakharia ordered police officers to use water cannon and rubber bullets to put an end to what he claimed was a failed coup d'état. The protests, which saw an attempt to storm the parliament building, were triggered by a visiting Russian lawmaker being given an invitation to make an address from the speaker of parliament’s chair. Authorities, claiming they feared UNM might hijack the riots and somehow occupy parliament, chose to act decisively.

The cabinet has a year “to bring the country to normality before the elections”, according to political analyst Ramaz Sakvarelidze, as quoted by InterPressNews.

Beside addressing economic, legislative and foreign policy issues, ministers will have the role of minimising the power of the UNM, the rival political force headed by self-exiled former president Mikheil Saakashvili, Sakvarelidze noted.

And the confrontation will predictably be fierce.

“You and Ivanishvili bring Georgia back to Russia’s orbit,” Melia, indicted for having led the riot against the parliament building, said in parliament addressing the ruling party lawmakers.

It was then that Gakharia declared “I will finish you”.

Tensions escalated at the beginning of September when the Georgians brought down a separatist drone conducting surveillance of a checkpoint built by the Tbilisi authorities. The conflict has not since developed, but if the government does not move against separatists building the metal fences, it is likely to fuel the opposition's angry rhetoric about Georgian Dream taking the small nation back into a closer relationship with Moscow.

Many of the newer EU member states saw their scores deteriorate on the latest Corruption Perceptions Index amid growing state capture and efforts by governments to undermine judicial independence.

Poor performance on latest index from Transparency International comes after years of warnings of the risks of democratic backsliding in the region should states fail to progress towards EU accession.

Ukraine’s population fell behind that of Poland for the first time as an electronic census revealed the number of citizens had fallen by some 5mn people to 37.289mn since the last census in 2000.