Orban secures fourth supermajority with 53% of the vote 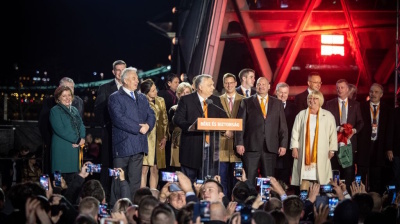 Prime Minister Viktor Orban’s Fidesz party has won Hungary’s parliamentary election by a landslide, securing a two-thirds majority amid a near-record turnout of 69.4% on April 3. The results exceeded even the most bullish forecast for the ruling radical rightwing party, which gathered 53% of the vote and will have 135 seats in parliament, two more than the supermajority.

The united opposition alliance won just 35% of the votes, enough for 56 seats out of 199. The heavy defeat could spell the end of the alliance, and the blame game has already begun.

Radical Our Homeland party stunned pollsters as it edged over the 5% threshold at 6.2%.

The opposition alliance can take some solace from the failed anti-LGBT referendum, held concurrently with the elections.

Pollsters were expecting a close race between the six-party alliance spanning the political spectrum led by conservative mayor Peter Marky-Zay, running on a pro-European and anti-corruption platform and promising to roll back Viktor Orban's illiberal policies that since 2010 have blurred the separation of powers in the country.

After the polls closed, analysts opined that another two-thirds majority for Fidesz was highly unlikely, but not ruled out, given the country’s election system, with 106 seats decided in individual districts. Most pollsters put the gap between the two political blocks below the margin of error and said key battleground districts would decide the outcome.

Median forecast a solid Fidesz victory after 7pm with 121-125 mandates after polls closed, but even that proved to be a conservative estimate.

The war in Ukraine completely changed the narrative of the campaign, sidelining the opposition issues of fighting corruption and returning Hungary to the European mainstream. Orban has successfully implanted fear in people and accused the opposition of wanting to send weapons and soldiers to Ukraine.

The Hungarian premier has positioned himself as a neutral peacemaker in the conflict, which drew criticism from abroad, and isolated Hungary even with the Central European V4 grouping.

"It is a war between two big countries, and it is something dangerous. We should not get involved," Orban told international journalists after casting his vote on Sunday morning.

He has also accused the opposition of wanting to impose sanctions on Russian oil and gas imports, which he warned would have led to the collapse of the economy in days.

The election map before midnight showed the country in full orange, the colour of the ruling party. The opposition won 16 of the 18 seats in Budapest and two more outside the capital. The future of one mandate in the capital hangs in the balance after 98.3% of the votes counted.

With the votes of Hungarians living abroad, this could go to the opposition, bringing the final mandate count to 134-58 for Fidesz.

Exit polls at the consulates from one European capital showed 75% support for the united opposition and only 10% for the governing party.

The ruling conservatives had collected more than 2.7mn votes, of which at least 400,000 came from the ethnic diaspora in neighbouring countries. Unlike Hungarians working abroad, they were allowed to vote by postal votes.

One of the biggest upsets of the night came from Our Homeland, formed by former Jobbik MPs after 2018. The radical rightwing party was running on an anti-vaccination campaign and a pro-Russian narrative, giving it 6.28% of the votes.

Party leader Laszlo Toroczkai hailed his party's achievement in securing seats in parliament, saying: "The miracle has happened; this is the first step in saving Hungary."

Hundreds gathered at the Fidesz election night gathering near the Danube to celebrate the party’s fourth consecutive landslide victory.

"We're sending the message to Europe that this is not the past, this is the future," he said. "This will be our shared European future."

The PM briefly mentioned Volodymir Zelenskiy in his speech, calling Ukraine's President one of the "opponents" he had to overcome during the campaign”, besides the left at home, the international left, the bureaucrats in Brussels, the money of the George Soros empire.

These comments by Hungary’s self-proclaimed illiberal leader foreshadow future conflicts with his EU partner and Brussels, which has held back EU funds due to the rule-of-law issues. Securing these funds will be vital for Hungary’s economy, with public finances in a shambles after a massive pre-election spending splurge and the fallout of high energy prices.

The first comments by analysts note that the changing geopolitical environment and the economic downturn will significantly narrow the new government’s leeway, not to mention increased isolation abroad.

The new government will have to make unpopular decisions, such as lifting the price cap on fuel and food. Keeping household energy bills at artificially low prices is costing billions of euros and will be untenable in the run. Without fiscal tightening and EU funds flowing in, Hungary’s budget deficit could widen to 10%, according to economists.

The mood was sombre, to say the least, at the opposition camp at the City Park Ice Rink in Budapest as results started to trickle in.

“I'm stunned, just like everyone else," Marki-Zay said. "I don't want to hide my disappointment and my sadness; we would never have thought that this would be the outcome."

Marki-Zay said the conditions in the election were "extremely unequal", adding, however, that the opposition was not disputing the result, "only that it was a democratic and free race".

One of the most closely watched contests of the election was in Hodmezovasarhely, the home town of mayor Marki-Zay and Fidesz strongman Janos Lazar. The former Fidesz cabinet chief made a comeback, winning by more than 4,000 votes and a 52% majority.

The blame-game on the opposition side has already begun. Leader of radical-turned-centrist rightwing party Peter Jakab, who skipped Saturday’s closing campaign rally, has blamed Marki-Zay for the loss but said the unity of the opposition must be maintained.

Sources close to the Socialists alluded to the conflict between the two. After winning the primaries, the joint PM has lobbied for his own conservative fraction, but the proposal was vetoed by Jobbik for fear that it would lose influence and votes.

Observers note that one of the reasons for the meltdown of the opposition was the poor performance of Jobbik, which has lost much of its base. Its radical voters deserted it for Our Homeland.

The Democratic Coalition will have the largest fraction within the alliance.

Party chief Ferenc Gyurcsany stressed that the election was neither free nor fair, but there was no doubt that a vast majority of Hungarians "has accepted this election and has given yesterday's government a mandate for tomorrow".

The anti-LGBT referendum, dubbed by the cabinet as the child protection referendum, held simultaneously with the ballot, was invalid with less than 50% supporting the questions on legislation that limits schools' teaching about homosexuality and transgender issues and about allowing reassignment therapy for underage children.