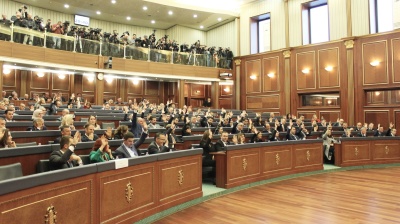 MPs are sworn in at the constitutive session of Kosovo's new parliament, but no government has yet been appointed.
By bne IntelliNews January 10, 2020

Kosovo entered 2020 with a new government after the country held a snap general election in October 2019.

The new government was set to be led by formerly opposition parties Vetevendosje and the Democratic League of Kosovo (LDK) which won the largest share of the vote in the October 2019 elections, with Vetevendosje leader Albin Kurti as prime minister.

However, talks between the two parties have run into difficulties as the LDK insists on appointing Kosovo’s next president, who will be elected by the parliament in 2021 after the mandate of Hashim Thaci expires. Vetevendosje opposes this plan.

As the talks dragged on, on January 6 Thaci gave Kurti 48 hours to ask for a mandate to form a new government or to propose a candidate for prime minister in order to avoid a constitutional crisis.

Two days later, Kurti said Vetevendosje will propose a candidate for prime minister “in the coming days”. At the time of writing no new government had yet been announced.

When it does take office, the main task of the new government is to continue normalisation talks with Serbia, from which the country seceded in 2008. The talks have been on ice since November 2018 when Haradinaj’s government imposed 100% tariffs on imports of Serbian and Bosnian products. Belgrade, as well as the EU and the US, has called for the tariffs to be removed in order for the talks to continue.

The October election was held after outgoing Prime Minister Ramush Haradinaj resigned in July 2019 to appear at The Hague-based war crime court investigating crimes committed by former Kosovo Liberation Army (KLA) against ethnic Serbs during the Kosovo independence war 1998-1999. Other high-ranking officials may also be summoned in 2020.

The other challenges for Kosovo include the fight against crime and corruption, reducing employment and the poverty rate.

Kosovo also expects the EU to extend visa liberalisation for its citizens soon, a process which was delayed by the EU for several years.

Kosovo is expected to be among Europe’s fastest growing economies in 2020. It is projected to post GDP growth of 4% each in 2019 and 2020, up from 3.8% in 2018, according to the European Bank for Reconstruction and Development (EBRD), with domestic demand continuing to be the main growth driver. The projection is slightly lower than that of the International Monetary Fund (IMF), which foresees Kosovo’s economy to expand by 4.2% in 2019.

However, there are a number of downside risks to the outlook, as identified by international financial institutions (IFIs). These concern domestic and regional political dynamics, possible delays in investment plans following the October 6 snap general elections, a higher than projected cost of the new law on public salaries, and the stability of international metals prices. The World Bank also identifies lower than projected IFI-financed public investment and slower growth in the EU.

Kosovo entered the new year without having adopted a state budget for 2020 due to the delay in forming a new government following the October election.

Kosovo posted a budget surplus €14mn in the first nine months of 2019, compared to a deficit of €21.6mn a year earlier, the finance ministry announced.

In 2020 higher public wages, remittances and consumer lending are expected to support higher consumption. Private investment is expected to increase, driven by favourable lending conditions and by foreign direct investment (FDI) in energy and real estate.

The new law on public sector salaries, if not regulated through prudent secondary legislation, could result in higher deficits, a breach of the fiscal rule on public wage growth, and a deterioration in the composition of public spending. Public employment should be contained through 2020 as it could result in further increases in compensation of public employees, the World Bank said. Because the law on public wages came into force only at the end of 2019, the full impact will not be felt until 2020. Higher public sector wages can also put pressure on private sector wages, which could undermine the competitiveness of Kosovar exporters. Additional fiscal risks might arise from higher untargeted social protection spending, unproductive capital spending and potentially lower performance of publicly owned enterprises.

To counterbalance the risks, Kosovo should improve the quality of fiscal spending and stability, the World Bank has recommended.

The Kosovan government’s debt management strategy 2018-2020 is built on risk constraints. These constraints cover the targets or guidelines for the currency, interest rates and the risk of refinancing the overall debt stock.

Credit growth in Kosovo continues to be robust because of high liquidity. As in 2018, better market conditions and lower interest rates led to higher private credit through 2019 which is expected to continue in 2020.

Corporate loans grew by 11%, particularly to such services as wholesale and trade and construction, and there was an 11.9% in loans to manufacturing companies; loans to households continued to grow fast at 10.5% y/y at end-July. Non-performing loans (NPLs) remained low at 2.5% of total loans at the end of July.

Ten banks currently operate in Kosovo, of which eight are foreign-owned. They had over 200 offices and employ about 3,300 people. The concentration rate, which measures the assets of the three largest banks, is around 57%.

BALKAN BLOG: Why politics must be tackled before the economy

Turkmenistan: Everybody yurts, sometimes
2 days ago
TURKEY INSIGHT: Surprise rate hike not actually a rate hike?
3 days ago
Uzbekistan 2.0 reforms making good progress
4 days ago
Capital forecasts 8 Turkish lira to dollar by year’s end
4 days ago
The Kremlin is hiking taxes for the first time in twenty years
6 days ago