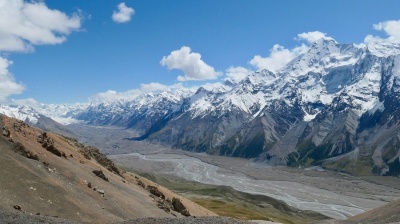 Climate change impacts on glaciers in Central Asian mountains such as the Tien Shan are having an increasingly profound impact on the 'small stans'. / Bruno Rijsman CC-BY-SA 2.0
By bne IntelIiNews January 19, 2023

This outlook is part of bne IntelliNews' annual series of reports looking ahead to what 2023 holds for the countries in our region. Read the full report here or download the pdf at the bottom of this article.

The three ‘small stans’ will spend another year attempting to recalibrate political and economic relations with Russia and China – and other players in the neighbourhood such as Turkey, Iran and the West – in response to developments driven by the geopolitical shake-up triggered by Moscow’s invasion of Ukraine.

If Russia cannot improve its fortunes and prospects while continuing to fight its war against the Ukrainians, it could increasingly lose out to China, in terms of rivals, most of all.

Central Asia watchers will closely observe the decades-old border dispute between Kyrgyzstan and Tajikistan that broke out into something like a three-day war last summer. Could a larger conflict be in store now that Russia, the security guarantor distracted by Ukraine, has lost much of its grip on the region?

Both Tajikistan and Kyrgyzstan took pronounced authoritarian turns last year, particularly the former with its cruel crackdown on the Pamiri people. Developments should be watched closely.

Both of these countries are also increasingly alarmed by the melting of glaciers brought about by climate change. Expect to hear much more on this issue. The whole of Central Asia lives with the ever-present fear of drought nowadays. The melting of water stores in the mountains will exacerbate growing water stress.

Afghanistan is another threat to the region that could grow. If the country under the Taliban dissolves into further chaos, terrorists and militants could increasingly spread instability northwards. Russia, which has military bases in Tajikistan and Kyrgyzstan, would not want to see the day when groups such as Islamic State have several terrorist cells hidden in Russian towns and cities.

Iran will continue to build relations with fellow Persian-speaking Tajikistan, while Turkey will attempt in particular to secure more influence and trade and investment progress in Turkic-speaking Kyrgyzstan and Turkmenistan.

Russia will be on guard against gas-rich Turkmenistan moving too far out of its orbit. Western investors will continue to try and convince the Turkmens to invest in infrastructure that could see Turkmen gas shipped to Europe via Turkey. So far, it’s a ‘No’ from Turkmenistan, which is concentrating on doubling gas exports to China, though progress with that objective is slow.

Economic growth held up relatively well in the three ‘small stans’ last year despite Ukraine effects, though if more difficulties besetting Russia combine with the global economic downturn this year, the next 12 months could be a different story. There is already evidence that remittances from Russia are falling as economic opportunities in the big neighbour to the north are reduced.

With trade transit routes across sanctioned Russia causing anxieties among exporters in both Europe and China, both the Europeans and Chinese are more and more looking to Central Asia to facilitate multi-modal expansions driving up Europe-China trade flows via non-Russian territory. The Middle Corridor, or TITR, which reaches Europe via Central Asia, Azerbaijan, Georgia and Turkey, will require more big investment.

Trade flows that link through Iran are also growing at a fast clip.

Each of the ‘small stans’ faces a continuing battle to keep a lid on inflation this year, while there could be difficult bargaining with China on the huge debts owed by the trio to Beijing, particularly when it comes to debt-distressed Tajikistan and Kyrgyzstan.

Both are sitting rather uncomfortably when it comes to repaying debt to the Chinese.

In the battle for clean energy, the Tajiks and Kyrgyz struck some big deals with Middle Eastern investors last year for renewables investments. Expect more such sizeable investments this year but it is paying for them that remains the difficulty.

Bishkek recently suggested that instead of repaying international creditors, it could steer repayments into securing a green economy. The Kyrgyz will argue that if the world is serious about addressing climate change, this is the kind of proposal that should get a fair hearing.

Belarus Corruption Watch: How one of Lukashenko’s 'wallets' evades sanctions
12 hours ago
Poland basks in the glory of being Kyiv’s chief ally in Europe
3 days ago
Russia forges ahead with gas ambitions in Uzbekistan, Kazakhstan
4 days ago
Mongolian government accused of rushing through veiled law that dismantles freedom of speech
5 days ago
Russia is preparing for spring mass mobilisation
5 days ago